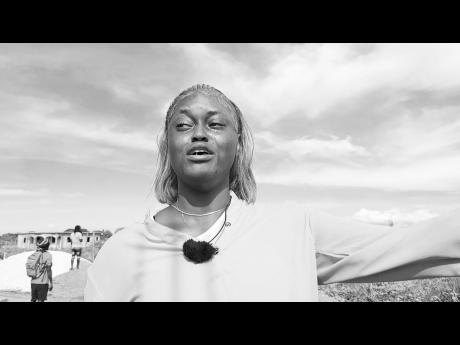 A devastated Shaniel Francis cries as her home was demolished yesterday in Clifton, Portmore, St Catherine. The homes of 10 other persons were also torn down after it was revealed that criminals have illegally selling land to prospective residents. 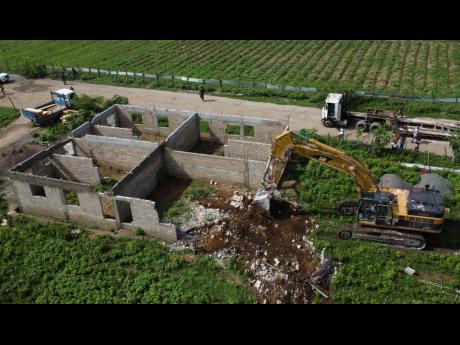 An aerial view of security personnel demolishing homes that were illegally built during an operation in Clifton, Portmore, St Catherine. 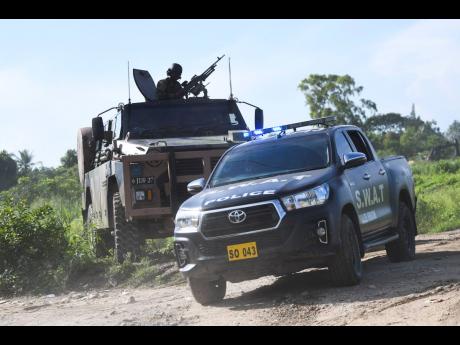 Members of the security forces overseeing the demolition exercise.
1
2
3

With tears in her eyes, 23-year-old Shaniel Francis watched motionless on Thursday as her dream of owning her own house vanished before her eyes.

She was among 11 persons whose unfinished structures were demolished in the Clifton community of Portmore, St Catherine. On Wednesday, Prime Minister Andrew Holness announced in Parliament that 30 illegal settlements had to be demolished as criminals were selling lots in the settlement, which was cut off from the Bernard Lodge sugar cane property now being used for multi-crop farming and the Bernard Lodge Development.

"I thought it was a legitimate arrangement. I paid my money, got my receipt and was happy that I was not far away from getting my title for my own lot of land," Francis told THE WEEKEND STAR.

The joy of owning a house, especially one that is built from scratch, was exciting for Francis, who has had to fend for herself from an early age. She thought the opportunity had come when she was told by a friend that she could get a piece of land for $800,000 in Clifton. Francis worked different jobs, saved her money and started to participate in round robins to put the money together. Armed with the money, Francis was introduced to a man in Clifton who looked at her taxpayer registration number and her identification, wrote her a receipt for $800,000, collected her money and assured her that the Sugar Company of Jamaica, the holders of the land, would provide the title.

"Even though I didn't have any money left I know I had to start my building so I continued to work and save and get involved in not one round robin but two so I could get money to buy the blocks, sand, cement, stone and steel," she said. "I was able to save $400,000 all that time staying with a friend sleeping on a mattress on the floor." Francis said she started the building and had to sell all her appliances at one stage to pay workmen. Now she has been left devastated.

"Mi nuh have nutten, all mi saving gone, mi might as well kill myself," said the devastated Francis, who first got the news of the demolition while she was on her way to work. Her sole intention was to put money together to finish a section of the structure so she could move in.

"I did not receive any form of notice. I was shocked when they called me and tell me that the house that I am working so hard to build is being destroyed," she said. "Mi nuh have nutten to live for everything gone."