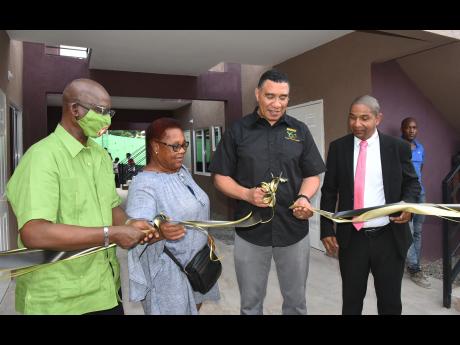 The families of Fourth Street in Belrock, Olympic Gardens, who were displaced because of a fire in November 2018, are now benefiting from a newly built apartment complex.

The 12-unit concrete structure was handed over by Prime Minister, Andrew Holness, who is also Member of Parliament for the area (St. Andrew West Central), on Friday, September 23.

It was constructed under the Ministry of Local Government and Rural Development’s Indigent Social Housing Programme and will now house nine of the 12 families who were affected.

The Prime Minister, in his remarks, said that discussions will take place with the three other families, to determine whether they will occupy the remaining units.

“It is a solid, well-built structure that will last, and they have made sure that it is connected to [a sewer main], that it has water and other amenities to ensure that the people who live here can have a basic level of comfort,” he said.

The one-bedroom studio units include a kitchenette, living room, bathroom and bedroom. The complex also has a common area balcony, washroom and two staircases for easy access. It replaces the wooden two-storey houses that were destroyed by the fire.

“The units are built at a very accessible cost, but these units are not for sale. So, persons who were dislocated by the fire were not owners of the property before. Belrock was built as a community to house persons dislocated by hurricane Charlie in 1951. We have not made any arrangements for them to pay rent, but they will basically have a peppercorn long-term lease. The idea, obviously, is if they outgrow this, if their circumstances change and they move out, then they can hand back the keys to us and we will give it to someone else who is in need,” he said.

Meanwhile, the Prime Minister said installing a sewer main in the community opens the opportunity for more house improvements to take place.

“Now that we have sewers here, we’re going to be looking at rebuilding some of the older units [within the community using] this or even a more enhanced form [of design] … so this will be an ongoing project,” he added.

He noted that the aim is to provide “stronger [and] permanent structures with more amenities,” across the constituency.

One of the beneficiaries, Shacquera Richards, said she feels “so elated. If it wasn’t God, I wouldn’t have this. I thank the Prime Minister… right now, I’m just happy”.

Another resident, 65-year-old Lucinda Ratigation, said she is so happy that she is lost for words.

For his part, Minister of Local Government and Rural Development, Desmond McKenzie, said the complex is an example of the Government’s commitment to provide social housing solutions to citizens who are in need.

“We’re looking at expanding on what has been put here, and once we have done that, I’ll be working through the Ministry to expand and take across Jamaica housing solutions of this [sort],” he added.

Mayor of Kingston and St Andrew Delroy Williams, urged the residents to “take care of the units and the community. Protect and keep the entire area of Belrock clean”.

The community was established in 1952 as a temporary housing solution after Hurricane Charlie caused major damage to the island the year before.