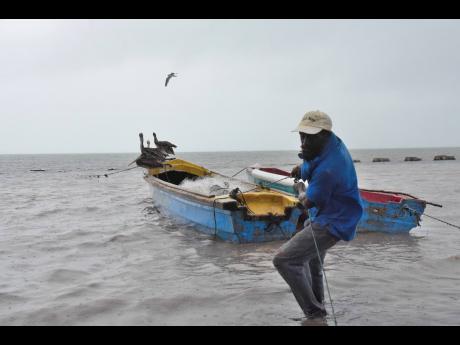 Fisherman Hevaton Bailey checks on his boat, which is docked at the Harbour Bay Fishing Beach in St Catherine, as showers associated with Tropical Storm Ian affected the southern region of Jamaica yesterday. 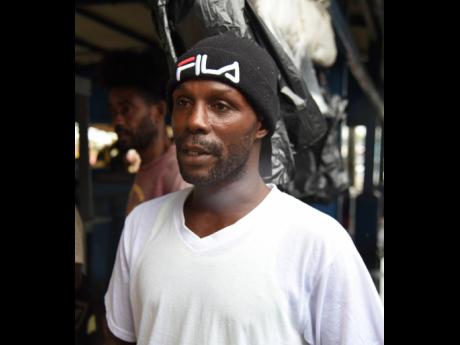 Kevin Campbell said lightning hit a piece of his fishing apparatus while he was at sea last Monday. 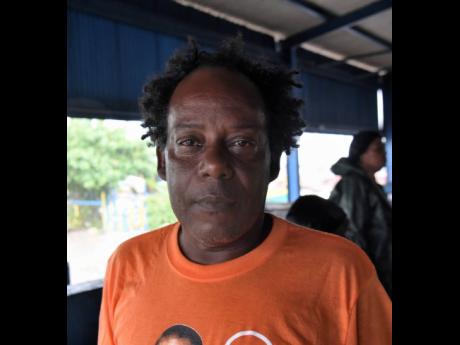 When lightning struck a piece of Kevin Campbell's fishing apparatus at sea last Monday, he knew that he and other fishermen would face choppy waters over the next few days.

A weather system, which became Tropical Storm Ian, had formed in the Atlantic and was barrelling its way to the Caribbean. Jamaica's southern coast appeared to be in its way, prompting the Met Service to encourage fishers from the cays and banks to evacuate and head to safe harbour.

Campbell, who at the time of the incident was wrapping up his week-long fishing trip, said it was clear to him that the weather conditions were rapidly changing.

"The weather business is not a joke thing for fisherman, enuh," he said.

"The catch last Monday was very mawga, mi a tell yuh, but I could tell say a dis did a guh gwan because I saw a cloud weh mi never see before. Some cloud weh go up inna di hill and look like a water spree. When mi see that mi know say the weather nah go nice," he added.

Although Tropical Storm Ian steered clear of Jamaica between Saturday night and Sunday, its outer bands dumped several inches of rainfall on the island. There were reports of fallen trees and power supplies being disrupted in several areas.

At the usually busy Old Harbour Bay Fishing Village in St Catherine, Campbell and other fishermen stood on the beach and watched as angry waves slapped against their boats that were anchored close to shore. While thankful to be spared the wrath of the storm, the fishermen said they are adversely affected whenever Jamaica is threatened by a tropical cyclone.

Additionally, with fish being a highly perishable product, persons normally refrain from purchasing the aquatic animal out of fear that it could spoil in the event they lose electricity.

Yesterday, buyers were hard to come by as it appear persons decided not to brave weather conditions to venture to the usually buzzing fish depot on the seafront.

The impact goes beyond activities in the market place, according to another man, Joslyn Murray.

"When system like hurricane pass through, everything mash up a sea, and a hundreds of thousands of dollars yuh can lose as a fisherman," the 51-year-old said.

He explained: "A roll a wire a fi bout $9,000 or $10,000 and yuh need all 10 rolls fi mek a good pot fi go out set out a sea. When storm and hurricane come a sea, everything gone. Yuh affi go find pot, stick, lacing wire, buy cork, and yuh still affi pay man fi cut the wire and fi seal the cork. So a wul heap a money," Murray said.