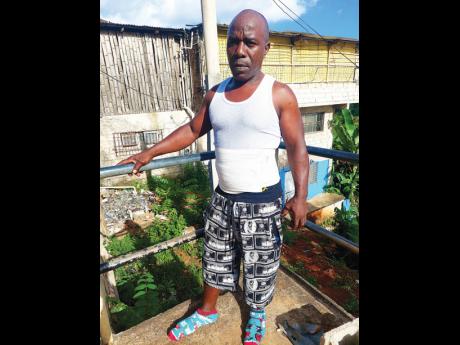 Garfield Ranger, the man who was apparently thrown over a wall in Red Hills, St Andrew, by a cop last Friday. 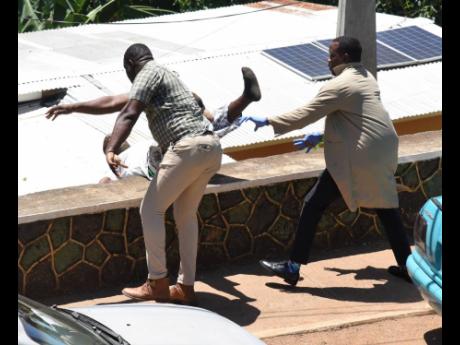 Garfield Ranger, a resident of Walker’s Hill, Red Hills, St Andrew, is on his way down, after being apparently being pushed over a wall in the community by a cop.
1
2

A shell-shocked Garfield 'Tuffist' Ranger, the Red Hills, St Andrew, man who was apparently tossed over an eight-foot wall by a policeman last Friday, is adamant that he did nothing that would justify the treatment meted out to him by the cops.

Ranger, who has been walking gingerly since the incident, has vowed to take legal actions against the State. The man, who described himself as plumber and sound systems operator, said he suffered loss of income and has been in untold pain since the incident.

"Me is not a criminal, enuh, me is a tradesman. A plumbing me do on construction site and a every day mi go a work. Mi no have no time fi idle, mi also have a sound and mi play music all over Jamaica as a selector. Since the incident me no work none at all, cyah lift up nothing," Ranger said.

The throwing incident took place outside of a premises in Walker's Hill, Red Hills, St Andrew, as scene of crime detectives combed for evidence following the tragic death of a senior, 74-year-old Philip 'Dolphus' Bennett. He was chopped by a machete-wielding man, who is said to be of unsound mind.

Outraged by what they consider a lack of urgency in the lawmen's response, angry residents were soon gathered at the scene to voice their disgust. Ranger told THE STAR that if it were the case that he was giving trouble, then he "might understand" the cop's action.

"But mi never have any problem with the man," Ranger said, adding that he merely commented on a statement he heard a cop make earlier. The cop, he said, was bragging that he has been a badman since he was 16 years old.

"So mi say to him say, 'No man, yuh a nuh badman, yuh a police', and then him just get mad and come from behind the tape," Ranger said.

"Mi did a wonder weh him did a go do, enuh, if him a go just come and grab mi up or something. But the man just come and go so 'boom!," he said, while gesturing to show how he was thrown over the wall.

"When mi realise say mi a go dung now, mi put mi hand behind mi head back because me know how over yah so stay," he said.

The drop, Ranger said, has left him in serious pain.

"From me meet inna dis mi no sleep good. Mi go doctor already and do X-ray, mi get medication and tek injection, but when mi go pon di bed and wake up inna di morning, it come in like mi turn robot," Ranger said.

Hugh Faulkner, commissioner of INDECOM, said that the matter was still in its early stages of investigation.

Meanwhile, prominent attorney Bert Samuels has weighed in on the process in which the abused man should be seeking legal redress.

"He should get the name of the police officer, get a medical report because he must have suffered some injuries, then he takes an action against the attorney general, not the police officer, because the attorney general represents servants of the Crown. You take an action against them for assault, for personal injury," he said.