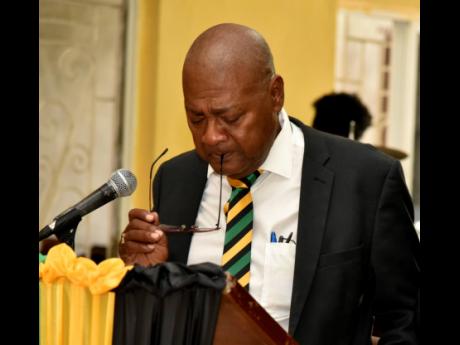 An heartbroken Michael Ricketts, president of the Jamaica Football Federation, delivers a tribute at the funeral for young reggae girl, Jedine Carr, in Heartease, St Thomas on Saturday. 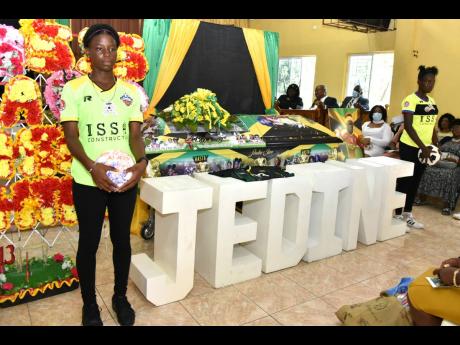 Two young footballers stand guard at the coffin that bears the remains of Jedine Carr. 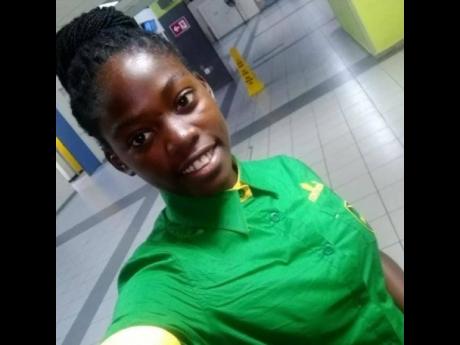 A heartbroken Michael Ricketts, the president of the Jamaica Football Federation (JFF), has joined the list of Jamaicans clamouring for the resumption of the death penalty for persons convicted of murder.

The teary eyed JFF boss called for the rehiring of the hangman as he spoke at the funeral of slain Under-17 footballer Jedine Carr. The home-going ceremony was held at the Heartease New Testament Church of God in St Thomas on Saturday.

"I am saying to the authorities, we must bring back capital punishment," said Ricketts.

Carr, 15, was shot and killed by two unidentified gunmen posing as passengers as she travelled in a taxi along the Lloyd's main road in Yallahs, St Thomas, on July 8. The cab driver, Andrew Mullings, who is believed to be the target of the attack, was also killed.

"Why is it that you should sit and plan to brutally take the life of a young lady, who provides hope, provides inspiration for those around her, and the next day you have your spliff, or your 'special', because it means nothing to you? Again, I am saying, the Government must hang people who deliberately sit down and plan to take the life of somebody else," he said.

Parliamentarians in 2008 voted overwhelmingly to retain the death penalty even though there have been no hangings in Jamaica since 1988.

Earlier this month, former national security minister, Robert Montague, called for the resumption of hanging. He said that in addition to putting the gallows, which is located at the St Catherine Adult Correctional Centre, into service, the Government should build four more, one in the west, one on the south coast, one on the north coast and one in the east.

"With five gallows, most areas will be within one hour of one of them. So as the judge pass sentence, straight to the gallows you go. And you must be hanged by your neck until you're dead, dead, dead or until yuh teeth kin!"

While Ricketts was not as colourful in his call, the JFF boss said the hangman's noose is the best remedy for persons who carry out premeditated killings. He said that Carr's killing was particularly distressing, noting that it came two weeks before a major breakthrough in her life.

"When I first heard of this brutal occurrence, it was a bitter pill to swallow because I knew her personally," he said.

"I met her while we were trying to get a group of young ladies to China, and of course, she was recommended by Wayne Thompson (president of St Thomas F.A.). I had to interact with her a little bit, and just like what everybody been saying, she showed that kind of a leadership quality," the JFF president said.

"When we spoke of her ability to lead, I just thought, 'Here we go. We have lost someone who would have not just impacted Heartease, as her community, but would have nationally impacted us socially'.

"I think we have lost someone who really had the ability to do well both from a footballing perspective and an academic perspective because she was about two weeks away from taking up a scholarship in the US. She really wanted to be a professional player. She wanted to achieve something," he said.

The police say they have yet to make a breakthrough in their investigation but will not relent until the culprits are captured and brought to justice.

"We are following a few strong leads," said deputy superintendent Oneil Thompson, the operations officer for the St Thomas police, adding "we are determined to bring the perpetrators to justice".