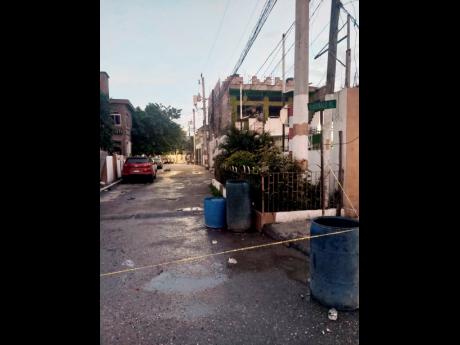 A crime scene tape is seen at McDonald Place, near the Olympic Gardens Police Station in St Andrew, following a shooting in the area last Tuesday.

After being forced to close due to violence two days into the start of the new school year last week, Balcombe Drive Primary and Junior School in St Andrew will today reopen amid a tense calm in the Olympic Gardens community.

The school's administrators have planned a warm re-welcoming ceremony for the students as part of a move to help calm the youngsters' nerves.

Last Tuesday, two people were shot and killed metres away from the school. While detectives processed that scene, another round of gunshots were heard coming from the nearby McDonald Place, where three persons were shot, two of whom also died. The incidents also followed a double murder in the area days before.

Sheirik Whyte, the school's guidance counsellor, said the children have been left traumatised by the various shootings.

Whyte, who has been at the school for four years, said the violence has had a significant negative impact on attendance there.

"That has affected us and still affecting us and what happened last week has us scared. I am wondering if our numbers will actually rise or reduce again. We are trying our hardest to let our parents know that we are providing all the necessary security," she said.

Meanwhile, Senior Superintendent of Police Kirk Ricketts, head of the St Andrew South Division in which Olympic Gardens falls, said that the police are following several leads in relation to last week's incidents. He also said that there has been a significant increase in policing activities in the area.

"We have stepped up our presence significantly and we have also ramped up our operational activities in the form of targeted raids. We have done a number of cordon and search operations. What we do is to cordon targeted communities and comb through the entire communities searching for wanted men and guns," Ricketts said.

"We have done at least two of these operations since the series of events and we intend to continue this in the foreseeable future as we seek to bring back the communities to normalcy," he said.