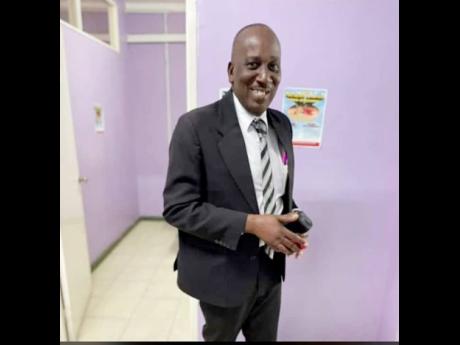 Detective Sergeant Victor Francis, the policeman who was stabbed to death while attempting to quell a dispute in his St Catherine community on Saturday, has been hailed as a champion cop and exceptional human being.

Francis, 56, is said to have been so dedicated to his job as an investigator at Centre for Investigation of Sexual Offences and Child Abuse (CISOCA) that he would sometimes go home and cry for victims.

"Him love children and a that's why him work a CISOCA," his son, Victor Francis Jr, who is also a police, told THE STAR.

"A nuff night him come home in tears because of the dangers he knows our children are facing," the younger Victor said of his father whose career in the police force spans more than three decades.

The police's Corporate Communications Unit reported that about 6:35 p.m., Francis observed two men in a physical dispute and decided to intervene. He was stabbed by one of the fighters during the tussle. The injured cop was taken to hospital where he was pronounced dead. The two men who had the altercation have been taken into custody,

He has been remembered by his family and co-workers as a loving and caring individual who was very dedicated to his job as a policeman. Victor Jr said that his father was a caring man.

"Him would be driving, sees a dog on the road, and him stop and feed the dog. Him buy books and uniform for children and say, gwane a school," the tearful son said.

He also said that his father embodied what being a good parent and husband was, and that he aspired be like him personally and professionally.

"He is very outstanding in terms of his performances in life and work. The only thing he believed in was police work. Him believe inna law enforcement more than anything else," Victor Jr said.

"We did almost everything together, so this is like half of my life gone. There are times when mi deh a work and him come look for me, and me do the same. A crime both of us fight, so we always stick together. He is a man who would leave nothing unturned, he was very meticulous and that is how he raised us. If him say him a guh do something, even if it tek 10 years, him ago do it. He was an outstanding father, words cannot describe. He made sure that his children have it all," he said.

"He was very professional, a no-nonsense person who had a serious approach to his responsibilities and duties. He never hesitated when it is required and always willing to mentor and teach the younger members. He was a seasoned investigator and was very detailed. Actually, he was my chief vetting officer in my registry, so a part of his responsibilities was to vet the files, and that came about out of his many years of experience. He was very knowledgeable, competent and dedicated to his duties. Given a task and he would just go at it without hesitation," she said.

The Police High Command has expressed condolences to the family, friends and colleagues of Francis. At the same time, Commissioner of Police Major General Antony Anderson has renewed his call for members of the public to seek peaceful means to settle conflicts.

"Too many persons are losing their lives or suffering grave injury due to mismanaged feelings and the inability to resolve conflicts, " he said.