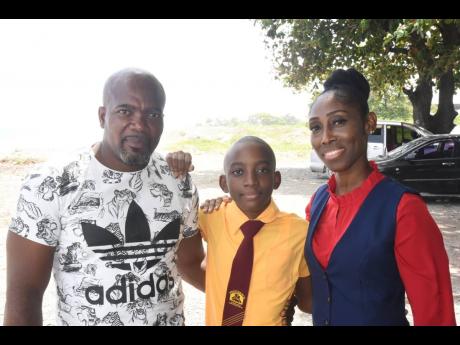 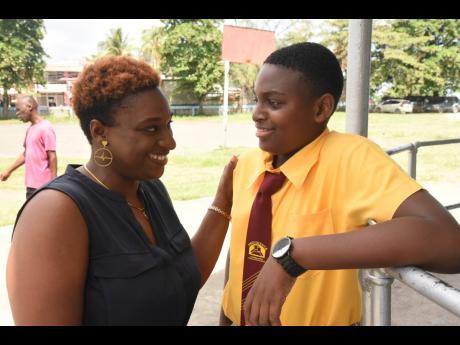 Ajani Smith (right) can count on the support of his mom, Donna-Dean Telfer-Smith, and his dad.
1
2

Apart from the impressive academic achievements and destined-for-greatness attitude, the two top performers in the Primary Exit Profile (PEP) exams at the Providence Kinder-Prep School in St Thomas have more in common than meets the eye.

Both boys said that the secret to their years of academic excellence was not merely hard work and determination, but also the strong parental support they have received.

Ajani Smith, 12, told JIS News that the main lesson that guides him in his endeavours is to "listen to your parents, because they've been alive for longer than you, so they know more than you".

Ajani is preparing to take Campion College, his first-choice school, by storm and has no plans of ever falling behind in his studies.

"I know for a fact that my parents will never let that happen. I can't give up. Because of them, I was able to achieve what I have achieved, and they pushed me to do my best. They got me everything I needed to be at the top, so I thank them a lot," Ajani said.

Tahier Fagan, also 12, said his parents are his motivation because they sacrifice so much.

"I don't want to let them down so I just keep working hard," he said. "They would ensure that they looked through my books from time to time and see if there is anything that I don't understand and help me to understand it." Come September, Tahier will be attending Ardenne High School, which was his first choice.

This means that both boys will be travelling almost two hours from St Thomas to the Corporate Area daily for face-to-face school.

An unfazed Ajani said, "I look forward to the school and I don't worry about anything else, just my grades."

An equally confident Tahier said, "I am not nervous because most of the time when I am on my way to Kingston, I just sleep through most of it."

The boys' parents are also confident that they will maintain their standard of excellence.

Ajani's mother, Donna-Dean Telfer-Smith, who is an English teacher by profession, explained: "I am a disciplinarian, but as a parent of a boy, you have to have certain methodologies and tricks to get to them. You can be stern, but there are times that you have to be relaxed so that they can see that you are a real person."

She recalled the experience of COVID-19 and the measures she and her husband took to support their son's educational journey amid unfamiliar territory.

"When we went into the online modality, I had to step in and ensure that he was focused. Because as much as you know that they are brilliant kids, if you leave them unguided, they are going to play games and such. I had to ensure that we found a routine and that we stuck to it," she shared.

Telfer-Smith ensured that her son was on time for classes, properly attired, and that he grasped his lessons. Luckily for her, Ajani has always been a "focused and mature" student who is "wiser than his years".

Tahier's mom, Tamara Deans-Fagan, who is a customer service professional, opined that "it is a student, parent and teacher effort, so you have to be involved in your child's life in every step of the way, and we plan to do that".

With the support of her husband, Deans-Fagan allowed Tahier to have an input in certain matters, and she teaches him to be confident.

Tahier's ambition is to become a biochemist, while Ajani has not decided on a career.