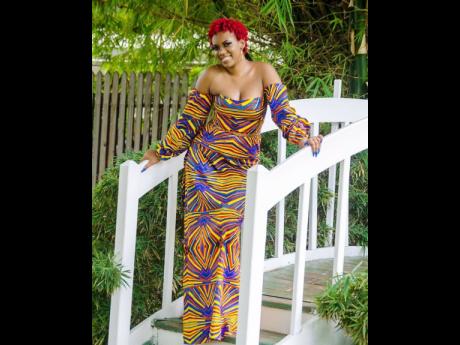 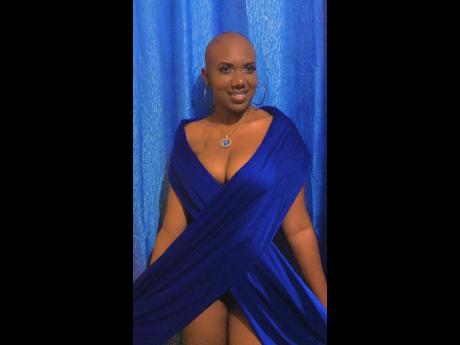 Diagnosed with colon (colorectal) cancer more than two years ago and now given a year or less to live, 29-year-old Shaunice Dean is refusing to let the dreaded disease steal her happiness, even as it takes a toll on her health.

According to the Jamaica Cancer Society colon cancer is the third leading cause of cancer-related deaths in Jamaica. In 2018, 642 new colon cancers cases were recorded and 373 people passed away from the disease. This cancer occurs in the colon, the large intestine, or in the rectum. It is developed from abnormal growths called polyps which can be removed before they become cancerous. It is, therefore, one of the most preventable cancers if persons are screened regularly and practise a healthy lifestyle.

Except for her bald head, stage 4 cancer has absolutely nothing on this stunning and free spirited young woman, who is putting up a fight for her life.

"My son, sister and niece keep me going. They are my main inspiration," she told THE WEEKEND STAR. "I have a beautiful smile I think, so why not smile? I can choose either to be happy for the rest of my years or sad every day. It has already taken a lot from me so I won't allow it to take my happiness permanently." Social media has also emerged as a therapeutic outlet for Dean who shares her cancer journey through live updates and posts.

"The more I do my TikTok videos and so on it distracts me from the reality. I am able to inspire other people who share their stories of having and coping with cancer. That helps to keep me going," she said.

Dean enjoyed a normal life prior to being diagnosed in 2020 and was very active in the customer service field. However, soon after the COVID- 19 pandemic hit, she began having a series of symptoms, including vomiting, severe abdominal pain and weight loss. Unfortunately, for almost a year she was treated for acid reflux.

Dean was later made aware that relatives on both sides of her family had colon cancer, which predisposed her to a genetic disorder called familial adenomatous polyposis. This is a rare disease where a number of precancerous polyps develop in the large intestine, increasing the chances for cancer. Dean then informed her doctors but was told that she was too young to get a screening for the disease and was not in the hih-risk groups like people who are obese or who drink alcohol excessively.

"I kept having symptoms and was getting medication. At the end of August 2020 it got so bad that I had to go to the hospital and was still being told that it was acid reflux. I went back to the hospital because I felt like there was something literally bursting inside of me," she said. "I did an ultrasound privately and an X-ray that showed there was a mass inside my abdomen that actually burst. Six days after I did surgery where they removed the damaged part of my colon and sent it to the lab. The result came back a month after that I had stage-two colon cancer."

Dean was somewhat prepared for the devastating news and started chemotherapy, but the sessions took a physical and mental toll.

"There were days when I couldn't help myself, but I have my son and sister as my main support. I also had other family members and friends. It was mentally draining as I went through depression and there was times when I was really scared. I was wondering when I was going to die and what was going to happen next," she said. Following the chemotherapy, Dean did medical tests to see if the cancer had progressed. An MRI showed lesions on her liver and a biopsy was done in March to detect if they were cancerous.

"The results came back in April and they were in fact cancerous. I had jumped from stage two to stage four in months," she said. Dean was shocked as she thought she was getting better. In June, she started an even stronger dosage of chemotherapy treatments.

"It was really rough and I was considering to stop the treatments. I asked my oncologist what my prognosis would be if I stopped and it wasn't good. She told me I had a year or less to live, but I believe that God has the final say. I did a fourth cycle of chemo but I didn't feel like my body was going to manage it so I stopped in July," she admitted. A recent CT scan revealed no new tumours but the existing ones have grown in size.

"Basically chemo didn't work for me and there are no other treatment plans for me locally. I have another surgery coming up and it is to remove the entire colon among other things. I have two tumours in my breasts and they are growing and they hurt so they will have to be removed," she added. Having exhausted all the medical options available locally, with no cure in sight, Dean has set her sights elsewhere.

"I am in contact with a hospital overseas and working to reach out to more as my intention is to go overseas to get further help," she explained.

Persons wishing to assist Shaunice Dean, may donate at https://gofund.me/5ca6691d