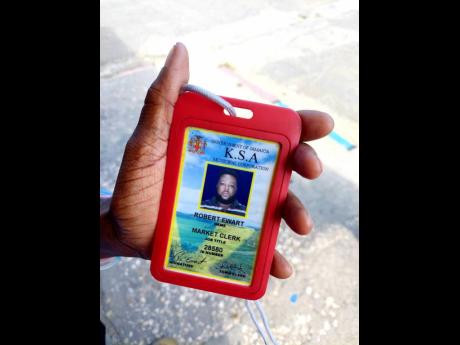 A strange feeling had overcome 29-year-old Iandia McKess last Friday, moments before she received a disturbing call about the father of her one-year-old child. Her spouse, Robert Ewart, 37, was shot dead by unknown assailants.

According to the police's Corporate Communications Unit (CCU), Ewart was among a group of people along Greenwich Park Road, Kingston, who were pounced upon by gunmen travelling in a Toyota Axio motor car. The men opened fire at the group, hitting seven persons, one of whom died.

McKess cut a dejected figure when THE STAR visited her home in Kingston yesterday. She could hardly accept that Ewart, a market clerk with the Kingston and St Andrew Municipal Corporation, had died.

After all, he had messaged her several minutes prior his demise that he would soon bring the pack of diapers that she was waiting on for their child. His plan was to have a drink or two in Arnett Gardens, St Andrew, with one of his childhood friends who was visiting the island.

But when Ewart failed to show with the diapers as promised, McKess sent him a voice message to tell him that the baby needed the diapers. He did not respond. However, when she heard her phone ringing she thought he was calling to say he was on his way. Sadly, someone was on the other end, telling her that her babyfather had been shot.

"A me and him live and me a tell yuh say from it happened me no sleep. Mi cyah eat, mi cyah do nothing," she said.

Even more painful for McKess is the fact that Ewart, who also works in construction, was planning to travel overseas with his children in August.

"Mi keep saying to him, 'yuh cyah have the kids dem visa and a waste it like that'. So him say he was going to bring dem up and come back the next day because him nuh really like foreign. A tomorrow (Monday) him fi carry dem go a passport office go renew dem," she said.

The father of six was hailed as a dedicated and loving father by Monique Henry, 30, a woman with whom he has a seven-year-old son.

She said that her last encounter with Ewart came an hour before he died.

"Him come drop off $2,000 fi him buy chicken pasta as a starter because him say Monday when him collect the rest of the test papers, him a guh give him di rest a weh him fi get, and a toy bike weh him buy for him," said Henry. - R.M