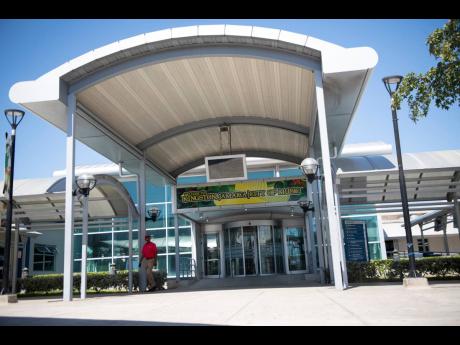 A Bajan woman who said she was told by a drug dealer to take a package from Jamaica to settle a debt she incurred, found herself before the Kingston and St Andrew Parish Court yesterday after she was held at one of the island's airports with ganja in her luggage.

On June 16, Shalisa Critchlow was attempting to board a flight at the Norman Manley International Airport heading for Barbados when her luggage was searched and a rectangular parcel was found. It contained vegetable matter resembling ganja and was said to weigh 10 pounds. When she was cautioned, she said: "A person by the name of [redacted] in Barbados, I was given some ganja to sell for him and I was to give them $20,000 but I could only give them $10,000. So I was told if I carried something from Jamaica, it would be even."

Critchlow, 30, told investigators that it was her first time in Jamaica and she only spent a week here. Critchlow pleaded guilty to possession of, conspiracy to export and attempting to export ganja. In plea mitigation before Senior Parish Judge Lori-Anne Cole-Montaque, Critchlow's attorney Manfas Hay submitted that his client made a wrong judgement call by coming to Jamaica and collecting a package and begged the judge not to impose a custodial sentence, in light of the circumstances.

"I do find favour with your attorney's submission, in the sense that a period of imprisonment might not be appropriate. But the view of this court is that the deterrent effect must be felt because of the seriousness of these allegations," the senior judge indicated.

For possession of ganja, Critchlow was fined the maximum of $15,000 or six-months' imprisonment and for attempting to export ganja, she was ordered to pay a fine of $180,000 or 12 months' imprisonment. On the count of conspiracy to export, she was admonished and discharged. She faced an additional charge of dealing in ganja but prosecutors offered no evidence against her. Before Critchlow was whisked away from the courtroom, Cole-Montaque informed her that a removal order was made in light of the fact that she was now convicted of an offence in the country.