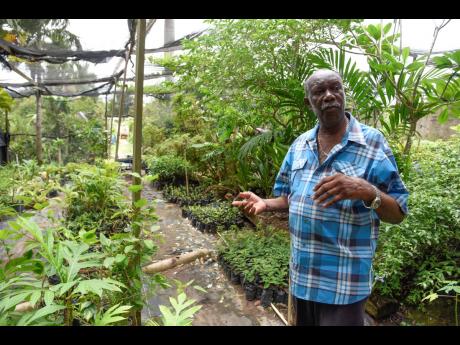 Joseph Johnson said that his nursery offers a number of non-traditional trees from which persons can get a variety of fruits.

Based on a small section of the Denbigh Showground in Clarendon, Joseph Johnson is encouraging Jamaicans to plant fruit trees with his nursery.

Johnson, who works as the country representative for Trees That Feed Foundation, a non-profit organisation vested primarily in planting fruit trees to combat food poverty and climate change, says his nursery has been in the business of growing fruit trees for more than 20 years.

"We have done quite a bit in the delivery, production and supply of fruit trees generally to Jamaica," he stated.

"We are carrying right now pretty close to 16 different varieties of fruit trees. We carry the breadfruit, which is the flagship for Trees That Feed. We carry the coconut, mangoes. We have up to 16 different varieties of mangoes to include some hybrids and exotics. We have avocados, June plum, sweet sop, soursop, naseberry, otaheiti apple. We do guava, custard apple. We are prepared," he said.

"It serves very good purpose for the country because the range of non-traditional that we do, I hardly think the government nurseries would have that," he said.

Growing trees by using various methods, Johnson says he has plants in a wide array of sizes.

"We do it by different methods, potted, we have them in bags. So we have different levels. We have some that are bare-rooted and we are big on grafting. So our mangoes are all supplied as grafted plants," he explained.

Grafting is a horticultural technique in which tissues of plants are joined to continue their growth together. The upper part of the combined plant, called the scion, will be the new plant, while the lower part will act solely as a rootstock.

Though Johnson primarily supplies crops to the Trees That Feed Foundation, his plants are also available to the public.

"We love to know when you buy a single mango for your backyard and then three years' time you come and show me and say 'It's bearing'," he said.