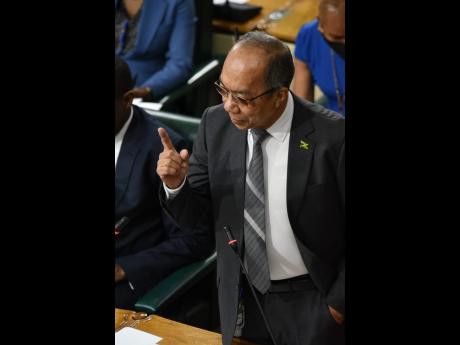 Minister of National Security Dr Horace Chang has confirmed that a suspect in the heinous killing of a mother and her four children in Clarendon is now in police custody.

Chang made the announcement in Gordon House earlier this afternoon while members of the Lower House collectively condemned the horrific crime while expressing condolences to the grieving family members.

He said that the man in custody is said to be a distant family member.

The tragic discovery was made at their home this morning in the community of Cocoa Piece in New Road.

The mother has been identified as 31-year-old Kimberly Wright, and her four children are Kimana Smith, 15, Shemari Smith, 10, Kafana Smith, 5, and 23-month-old Kishaun Henry.

The national security minister said the brutal killings have shaken the entire leadership of the country and touched the hearts of the entire country.

“This kind of savagery is not about policing, it is a far deeper psycho-social problem of which we have to unite as a country and as a people and find the vulnerable ones and begin to get at the root cause of this prevalence of violence.”

Speaker of the House of Representatives Marisa Dalrymple Philibert, in her opening remarks at the beginning of the sitting, highlighted the incident that has left the country in shock.

“These are dark times for our country. We need as a country...all of us to stop and reflect and pray for all of us as citizens of this country.”

Minister of National Security Dr Horace Chang has detracted the statements he made in parliament earlier today that the suspect in the murder of the Clarendon family of five was in police custody.

Rushane Barnett, the cousin of the deceased Kemisha Wright, is still at large.