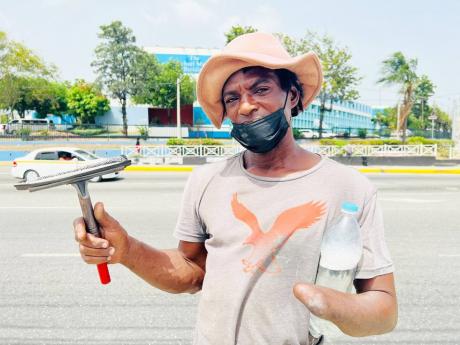 Richard Elliot said that despite only having one hand, he is willing to do other jobs than just wiping the windscreens of cars.

When Richard Elliot lost his left hand in a dispute, he also said goodbye to his dream of building houses.

At the time, Elliot, known to most as 'Skiller', was working on a construction site in order to gain the experience needed to become a mason. But on one fateful day in 2005, Elliot says he was in a dispute with another workman that took an unexpected turn as his hand was chopped off.

"Mi guh pon a site work fi guh cast a house top and di morning mi guh pon it, me and a man kick off. And di man guh weh and come back, baps! A me dat get it, mi hand gone!" he said.

Seeming almost defeated by the mere memory, Elliot told THE STAR "Mi feel like half a mi gone, man. Mi did a build house and dem thing deh. A my dream dat, enuh. Just build baay big house! Cyah do that again. Mi couldn't even too help miself. How mi did ago build house?"

Since then Elliot says he attempted several odd jobs but the loss of his limb made it hard for him to maintain employment. He settled on wiping the windows of motor cars.

"Bout 15 year me a wipe glass. Mi did a sell juice and dem thing deh but chu it did a hurt me hand and nothing nah gwaan fi di juice and dem thing deh, and suh mi say mi a go get a wiper and mi next brethren weh a wipe car say mi can come do this and him show mi how fi deal wid it," he said. "So mi get in play and start do it. But more time it rough out yah cause more time yuh wipe all five, six car and you still nuh get nothing. And maybe a one man will up deh and still gi you a $50 make you nuh feel too drop dung. But it rough, cause see a sun mi affi inna whole day."

The 48-year-old, who is most often on Half-Way Tree Road, says his work days start as early as the sun rises and often go into the late hours of the afternoon. He is hopeful though that even though he has no Caribbean Examination Council passes, he can find a job that can help him to support his children.

"Mi woulda love fi get a work, a decent work weh me can make some money cause a three youth me have and two a dem a guh school now, enuh. Mi wish somebody coulda say ''Oney' come deal wid sumn more time'," he lamented.

While hopeful for anything he can get, Elliot still believes that he can contribute despite having some physical limitations.

"Mi can do nuff likkle thing but mi wouldn't want nothing too rough fi deal wid, like sumn too rough weh di hand cyah manage. But anything them have, gi mi still 'cause more time you cyah pick, enuh," he said.