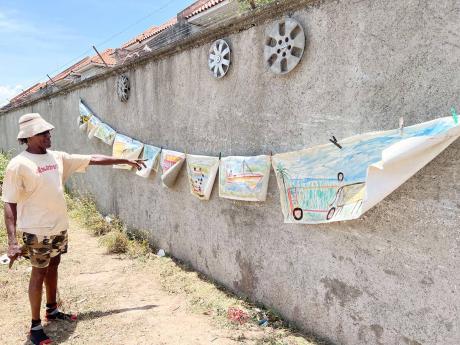 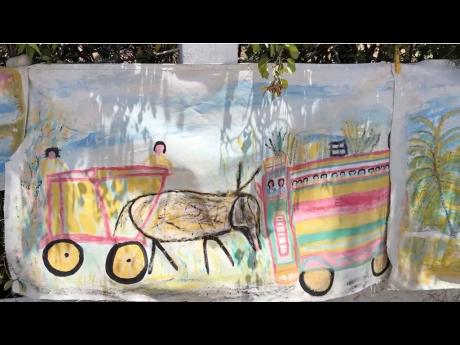 Perkins’ favourite piece depicting a scene from Blue Lagoon in Port Antonio, Portland. Perkins has employed the use of acrylic paints on canvas to recreate from his own memory a bus with passengers, donkey cart, and the lush scenery of the popular tourist spot in Portland. 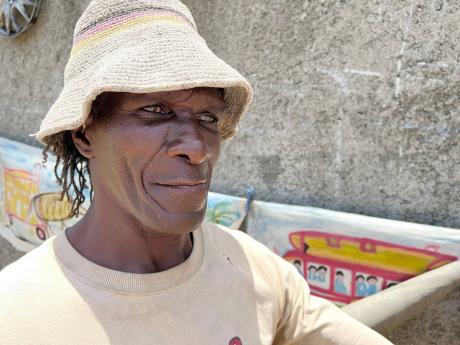 To the casual passer-by, the work of visual artist Winston Perkins may seem amateur at best, but Perkins has been making a living off his paintings for the last 30 years.

Perkins, who displays his works on Lady Musgrave Road in St Andrew, says he draws his inspiration from the things around him. One of his favourite pieces is of the Blue Lagoon in Portland, where, he says, he used to frequent in his younger days.

Here is his description of the painting that an untrained eye could mistake for an art assignment submitted by a lower-school student: "So di jelly man now park up fi all him likkle jelly and have him likkle time, and di bus park up now; and see all a likkle man pon di bus back hop di bus come cool out. Is a tourist resort area."

"Mi ask them how much dem have. Mi nah pressure dem. Is not like mi a watch di money. Mi a watch how dem love di work and see di creative inna mi, and di inspiration weh me a put out. True art! So mi naah really watch di money, but is a form of survival."

Perkins told THE STAR that his journey to becoming an artist started with a love for music.

"That's my roots and my culture. I spend many years doing artist work in this streets. From Constant Spring. I just love it so much. I love music, enuh, but to di way how mi see dem move inna di music, mi just turn it to di art," he said.

"It come een like seh me just love this thing. Instead, fi deh round friend or inna cayliss company, or amongst some people, mi just seh mi a gwaan put this to the world. Mi just start gwaan wid me thing."

He said that his pieces come from his thoughts and go to his heart. And by using acrylic paints on canvas, he his able to make jaw-dropping masterpieces.

"People check mi and like it and come buy regular. People just stop, like how unnu woulda stop, and just come support me and say dem like di work. So that encourage me more fi carry on," he said.

Despite being confident in his work, Perkins remains humble, never failing to mention other artists at every chance, showering them with respect.

"Bwoy, mi just gwaan do mi thing, enuh. We just dweet chu we like it. We do it fi a living and survive. This a the only thing mi do fi work. So mi just take it serious and out in the streets," he said.

He prices his items by size and the length of time they take to be completed. The most expensive of his pieces goes for $40,000.