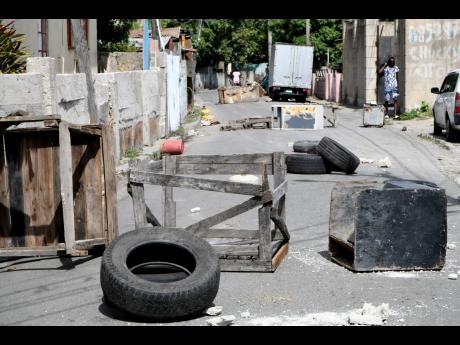 The roads in Tawes Pen were blocked by the residents who said they were trying to prevent a reoccurrence of Sunday’s incident in which four men were murdered by ‘invaders’.

On Sunday night, a female security guard on duty at the Spanish Town Hospital in St Catherine was heading up a flight of stairs when she recognised a car from her community speeding towards the accident and emergency section. She dashed towards the car and her knees gave way. She fell to the ground after recognising the feet and slippers of her younger brother, Kirk Barrett, hanging out of the vehicle.

Barrett, 21, a clothes vendor, was one of four men who were shot and killed in the Railway Lane section of Tawes Pen in the parish that night. A fifth victim was being treated at hospital up to press time last night.

"Mi never know say anything happen in mi community, is just the car mi recognise and come back down the stairs and as mi see di slippers and di foot, mi know a mi bredda. Mi just know say mi drop and roll, is like mi never know myself. Mi bredda dead dead. Mi never one day expect say something like this could a happen," the woman said.

She described Kirk as an extremely quiet being who loved his nieces and nephews. She added that he liked to party, and that he, alongside his best friend Nicardo Moore, appeared in several music videos. Moore was also killed in the attack.

Police have identified the other deceased men as Desmond Bloomfield, 34, and Horace Letterman, 28, both of Spanish Town addresses.

It is reported that at 7:30 p.m., the men were standing along the roadway when a motor vehicle approached them. Armed men exited the vehicle and opened fire at the group hitting five persons.

Residents said Letterman had just returned home from his mother's funeral and was eating with his friends when the nightmarish event unfolded.

"If a never funeral did keep a lot of us would have died because we go funeral and people tired so a lot of us go in. Normally all 20 a wi would be out here suh a night time a play ludo," one man said. "Dem kill mi fren dem fi nutten, none a di man dem who dead anno bad man."

Devon Moore, father of Nicardo, cried uncontrollably while his wife laid on their bed with a blank stare.

"Mi beg Jesus bring back Nicardo and Jesus nuh bring him back. Mi beg mi son to come back and him nuh come back all now. Mi work hard to take care a mi family and mi make sure say mi kids dem nuh short a nutten. Dem kill mi son like a dog," Devon moaned.

One of Moore's siblings described the Jose Marti Technical High School past student as a helpful individual who had dreams of becoming a psychiatrist.

Senior Superintendent of Police Howard Chambers, head of the St Catherine North Division, told THE STAR that Sunday's incident appears to be a reprisal killing for another incident in the St John's Road area of the parish.