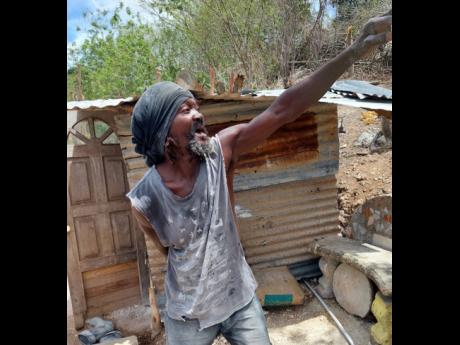 Everald Gayle talks about how a rock, followed by mud and flood water rolled into his house in Shooters Hill, St Andrew in October 2020. He now lives in the hut seen in the background.

However, this changed in October 2020 as he was forced out of it by floodwaters and a landslide, both triggered by heavy rains. Today, he lives in an extremely small hut a few minutes away from his former home. He is yearning to improve and expand his living space and is seeking the public's assistance.

"Mi move yah so two months ago. Mi just build up a little place but mi can't even lay down straight inna it because it small. Mi get comfortable and di breeze cool up here. Di likkle money whe mi did a give the people dem weh mi did a stay with mi can save it. Mi can't even put a bed in it the way in deh small," the 52-year-old construction worker told THE WEEKEND STAR.

In addition to the small bench that he sleeps on, there is a bit of space for a flat-screen television and a few buckets. But turning around in the hut seems almost impossible for Gayle.

He said that a few hours before his house was destroyed, he assisted his neighbours whose premises was being battered by the gusty winds and rain.

"Mi see di earth just a move and run way like water and mi see a man house just cock up suh. Mi see mi neighbour name 'Foodie' house mashing down and a come down to the main road. Mi go back inside and say mi ago lay down because nothing nago happen to mi house," he said.

But hours later, he had a rude awakening and saw that he had a huge unwelcome guest.

"In di hours a di night mi wake up and is a big stone weh did behind mi house fi years deh beside mi bed. Mi lay down and part a di big stone inna di bed with mi. Di rain a fall and mi say mi nah come out enuh, mi a lay down till daylight," Gayle said.

He said that he sought shelter at a friend's house and later returned to retrieve his belongings, but was unable to, although he received assistance from an emergency team.

"Dem move way some a di tings and break down the door and di whole house cover with mud. The bed, TV and everything weh mi have cover with mud. It was devastating. Mi house never sink enuh, everything from the hills just come down and lick down mi house. Di rain and mud clean weh everything," he said.