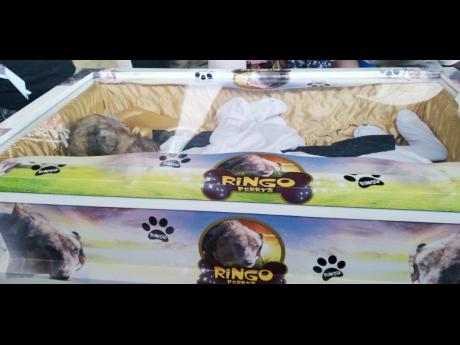 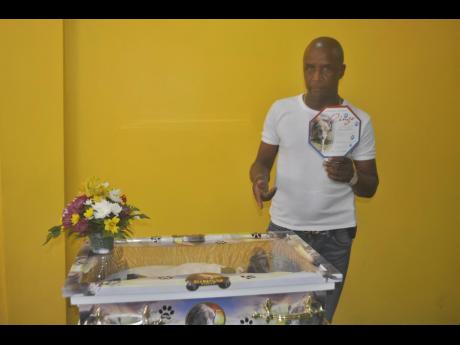 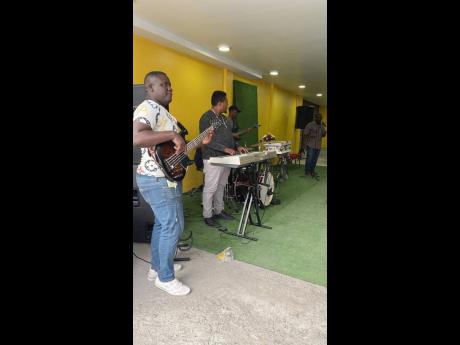 The band performing at the funeral for Ringo.
1
2
3

The saying that 'a dog is a man's best friend' was real for Peter Perry, owner of Perry's Funeral Home, as he laid his pooch Ringo to rest yesterday.

The funeral was held at the funeral home's Jobs Lane, Spanish Town, parlour in St Catherine. The mongrel went out in fine style as he was placed inside a white, glass casket attired in a black and white tuxedo, complemented by a black bow tie. His name was written over his glass casket. There were also dozens of programmes and buttons bearing photographs of the animal in happier times as well as live performances from the Perry's Exclusive band. Close to 100 persons turned out at the funeral home to celebrate the life of Ringo, who passed away two weeks ago. There were no tears, but remarkable tributes and remembrances for Perry's four-legged friend. Speaking with THE STAR yesterday, Perry said Ringo and another dog named Dave had remained his friends since he gained ownership of the establishment several years ago.

"He was a regular mongrel but trust mi, it was these dogs who make mi realise how loyal animals can be. Ringo would walk up and down during the days and ensure say things go normal and once it reach 5 p.m. when it's closing time, no one else could enter this compound," he said. "They both came here the first day I lift the first leaf to clean up this place to make it what it is today so that was years ago. They never leave me until today." Perry said Ringo assisted him in securing his business place even after he was hit and severely injured by a car three weeks ago.

"I can remember the car hitting him and he ran to me and I started to rub his head as he cried," Perry said. "He broke his back so I purchased a wheelchair for him and I used to push him around in it but he got sick and stopped eating and so on until he died. I bought a wheelchair for US$480 (approximately $74,000) for him and he moved for a while until he died. This is very sad."

Although he has not placed a price tag on the funeral, Ringo's funeral could have easily cost six figures. But Perry said the animal is worth every penny.

"It is not a waste of money for me. I love these dogs and I even had social media pages for them and the amount a views them get. When Dave dies, he is going to get the same treatment. Both of their graves are prepared beside each other on the compound," he said.

Perry told the news team that he is imploring motorists to be very careful on the streets and show respect for all road users, even dogs. A repast was held after the interment.