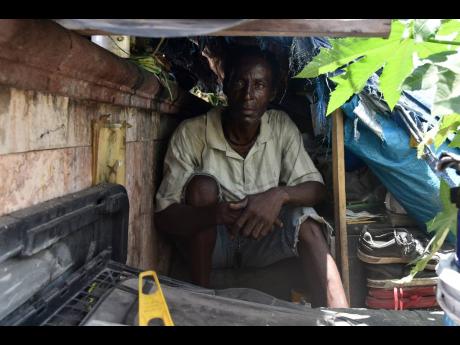 Kenneth Washington looks out from his ‘shelter’ along Heroes Circle in Kingston. Washington said that he is not safe there as men steal his food and try to stone him. 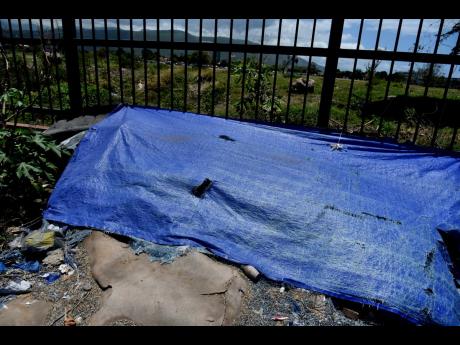 The tarpaulin under which Washington spends his nights.
1
2

Kenneth Washington, a homeless man who has made living space for himself along Heroes Circle in Kingston, says that he is constantly being robbed of his meals even before they are fully cooked.

"A nuff time mi go a mi bed hungry. Imagine, mi look wood and catch up fire and cook on two big stone and sometime as mi take mi eye off the pot, man come an' take away the hot pot a food. I don't know if a eat dem eat it or dash it way. Sometimes mi hussle fi di entire day and glad fi get a ting fi cook but di man dem move di pot a food more time," he said.

Washington, 52, who spends his nights under a sheet of tarpaulin, said that he has been on the streets for the past three years, after he left his childhood home on Mark Lane in downtown Kingston following what he called a domestic dispute.

"Mi did under a lot of stress and pressure and mi just find myself here so and mi just take a tarpaulin and just shelter myself. But right here suh nuh really comfortable either. Mi and mi family dem not good any more. More time mi a lay down and a bare big stone reach mi because the little bwoy bwoy dem just deh bout di place and take set on mi. Mi nuh safe here suh," he told THE STAR.

Washington crawled out from under the tarpaulin and stood barefoot on the scorching ground as he spoke to the news team. With perspiration drenching his forehead, he explained that the heat is almost unbearable inside his 'dwelling', which is about eight feet in length. The cramped space has been his home since he took to the streets. Washington said that he had dreams of becoming a pilot but all those aspirations have withered with time. Pointing to a small trench that he constructed, Washington said that whenever it rains, his 'dwelling' is flooded. Sunshine doesn't brighten his day either as he said that the heat is almost unbearable under the tarpaulin.

"Ants bite mi up a night time and the heat from the concrete hot like fire. Mi have the sponge weh mi use fi di bed and some old shoes and clothes. Mi can't stand up or sit inside of it because it nuh big or high enough. Mi can't walk or turn in deh but mi try fi keep it clean as possible, suh sometimes mi change it up and put the shoes up a top and the clothes down a bottom," Washington said.