Senior citizen runs through burning house even as gunshots rained 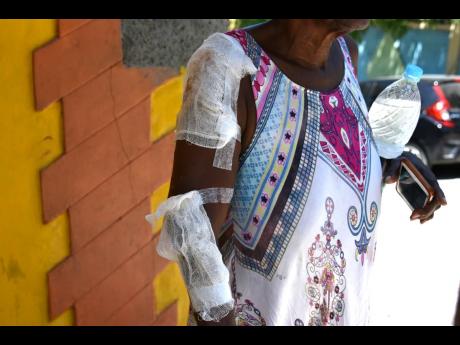 This woman had to run for her life through the flames. 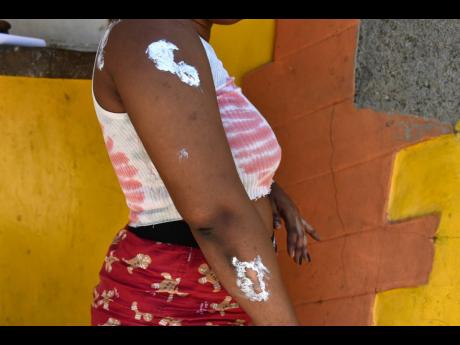 A resident shows burns that she received after her house was set ablaze. 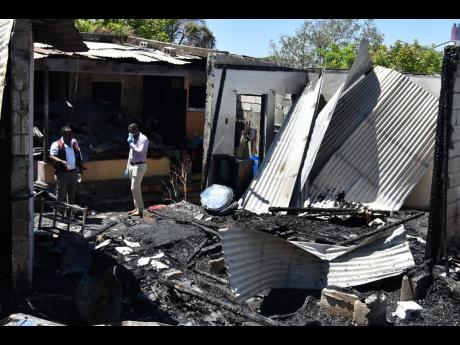 The nine-bedroom home that was destroyed by fire leaving 13 persons homeless.
1
2
3

As fire razed her dwelling early yesterday morning, a senior citizen had no other choice but to run through the flames even as the arsonists fired shots close to the 10-bedroom house in Rockfort, east Kingston.

"Mi say mi haffi go bun up inna da fire ya because mi a guh tru it and mi start run, and when mi reach the gate, mi drop and chip mi knee and burst mi mouth. Mi thank God fi life. Mi lose mi medication dem and mi diabetic but the police dem carry mi to the hospital and mi get two injection and dem dress the burn. Mi visa never burn up still," said the 68-year-old woman. She is one of 13 persons who has been displaced by the attack on St Raphael Road which reportedly stemmed from a domestic dispute between a couple on Mother's Day. It is reported that the attack was launched about 3:45 a.m.

"Mi cousin and her babyfather have a dispute and him beat her up and him rush to her mother to stab her up. So mi cousin dem run him down and from there suh the argument start. Earlier in the day, we siddung outside and man just start fire bare shot in we direction and we have to run. We deh deh and we hear dem a send threat say dem ago burn down the house but nobody never take dem serious," a woman told THE STAR.

Head of the Kingston East Police Division, Senior Superintendent Tomielee Chambers, confirmed that the occupants of the space had received threats on Sunday that their houses were going to be firebombed but no one alerted the police. She said the persons who were involved in the dispute returned to the location early yesterday and torched the dwelling.

"Our investigations lead us to premises along Red Hills Road and one of the suspects who was involved in the arson was picked up and is currently in our custody. We are also searching for other persons who we believe are involved in this attack. We are here maintaining our presence to see how best we can get things under control," she said.

When the news team visited the area yesterday, those affected by the blaze wore glum expressions as they face an uncertain future.

"Is like dem never wah nobody come out a di house. We deh next door a try throw water on the house but everything gone. One a mi family lose about $350,000 because she just come from farin and a next girl who have a small loan business lose har money too. See the little baby deh, is the neighbour give us a Pampers and a panty for her this morning. Everything gone," a woman said.