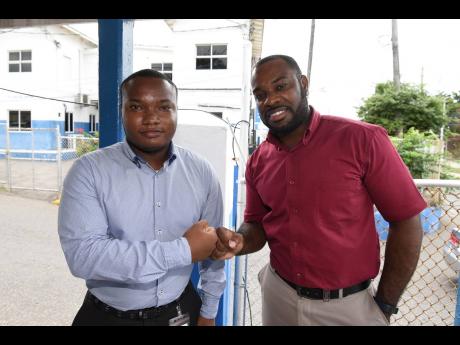 Andrei Ottey (right) thanks Jordan Grindley for returning his wallet and the $50,000 that was inside it. Ottey lauded Grindley for his act and said the two are now friends.

A Corporate Area man, who admitted that he struggles to make ends meet on a monthly basis, returned a wallet with more than $50,000 on Thursday, after learning about the owner's financial woes via a note in the billfold.

Jordan Grindley said he was almost moved to tears when he read the 'to-do' list that was in a compartment inside the wallet. The list included car insurance payment and purchasing of children's formula. The 23-year-old said he found the wallet in the middle of the road on Wednesday when he was walking with a friend to a bus stop in Manley Meadows in Kingston where he lives.

"I picked it up and immediately started to search through it to see if I could find a number to call the person. But it was when I reached home and searched through it again I saw the piece of paper. It move mi same time because me could a see say the person did have a lot on his plate as well," said Grindley.

The Good Samaritan said he decided to take the wallet to the Elletson Road Police Station in Kingston the following morning, even though he was also in need of a financial assistance.

"Mi never grow up dem way deh, plus when mi look at his baby picture, I was like 'I wouldn't like this to happen to me' and a so me say mi ago bring it to the station," said Grindley.

The owner of the wallet, Andrei Ottey, 33, said a flurry of emotions took him over yesterday morning as he sat on his verandah wondering how he was going to pay his bills.

"Mi siddung pon mi verandah a try get ready for work, but the way how it lick me [losing his wallet] I couldn't move. Same time mi see a police car drive up and ask mi if a me name Andrei and show me the ID. Him say 'Somebody find yuh wallet, enuh, and bring it back here'. Mi just start break down in tears same time," said Ottey, a sales representative at the Molynes Road branch of Bert's Auto. The men say that they are now friends.

"A mi bredda dis! Trust me, weh Jordan do is inspirational because a nuff people would a tek di money and return the wallet or even fling it back on the ground. Di reason mi end up inna Manley Meadows a because mi go visit me in-law. But then when mi start play wid mi baby cousin, mi put the wallet on top of di car and forget to take it off when mi a leave," he said.

The policeman who recorded the report, commended Grindley for his selfless act.

"Things like this must be highlighted. What the young man did is very inspiring and it shows that there are still good people in Jamaica," he said.