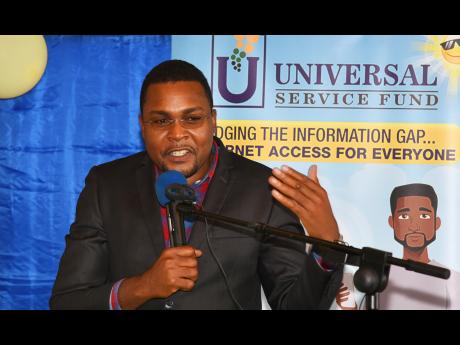 Minister without Portfolio in the Office of the Prime Minister with responsibility for Information, Hon. Robert Morgan. (Contributed photo)

Minister of Finance and the Public Service, Dr Nigel Clarke, is to engage with financial institutions regarding recent increases in banking fees.

Minister without Portfolio in the Office of the Prime Minister with responsibility for Information, Robert Morgan, made the disclosure in an interview on Thursday (January 27).

“He is about to embark on a series of discussions with the institutions to look at these charges and to figure out the way forward with them as it relates to these charges,” he said.

Since the start of 2022, the National Commercial Bank (NCB) has announced and introduced increases in various fees. In addition, Scotiabank is set to raise banking fees effective February 1.

Mr Morgan said that the coronavirus (COVID-19) pandemic has upended the economic situation in Jamaica and has challenged the social and economic circumstances of Jamaicans.

“It was felt by the government, and you heard it from the Prime Minister and the Minister of Finance, that in light of all these circumstances, it is very challenging for us to accept or even accommodate a situation where certain businesses have added a greater burden on our people, who have been challenged over the last two years. We had an obligation to speak about it,” he said.

He noted that it is not the intention of the government, in a free market, to try to coerce or tell private businesses what they should charge for their goods and services.

In addition, he noted that “people outside are …watching and analysing the government’s approach to the financial market.”

“But fundamentally, as a government we represent the people, and wherever we see something that we feel does not accord with the best interest of the people, we have an obligation to speak about it and act on it,” Mr Morgan said.

The Minister said the government understands and appreciates that over the last two years, several banks have provided moratoria on loans, enabling customers to delay repayments, and that the banks, themselves, have also suffered from the impact of the pandemic.

“But there has to be balance in the system. You have to look at the circumstances of your customers, the economy and the people and make decisions that take into consideration the challenges that people are facing,” he stressed.

Mr Morgan noted that the Government must take a stronger role in educating citizens about the financial resources that are available to them.

“We can ensure that there is a competitive environment where people have choices. People need to start looking where they can get the best deals,” Mr Morgan said.