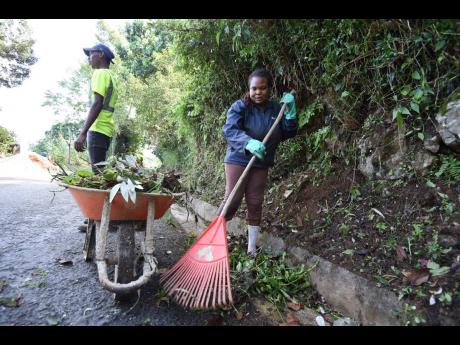 Verona Taylor (right) and Keniel Bell (left), residents of Rock Hall in St Andrew, hard at work along the Rock Hall to Above Rocks main road. 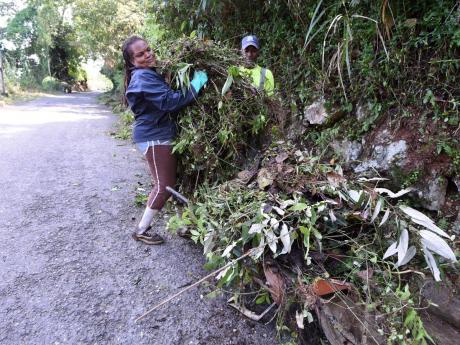 Verona Taylor plans to reward her son with a Christmas present from the proceeds of the Christmas Work Programme.
1
2

The programme, which involves bushing of roadways and the cleaning of debris from off the streets, provides many persons with much-needed cash in the Yuletide season. For Taylor, 39, it is an earning opportunity she could not pass up. She plans to buy a bicycle and a tablet computer for her son, Tavajay Harris, with the money.

"Mi tell him say him need fi improve him grades because it wasn't at the level where we liked. So one day inna January him say to me say 'Mommy, if me improve mi grades mi can get something for Christmas?' I told him yes," said Taylor with sweat marks dripping off her.

According to Taylor, a single parent, her son, who attends Padmore Primary School in Rock Hall, St Andrew, has been improving steadily throughout the year.

Determined not to disappoint her son, Taylor said she sought employment in various places but only came up with a temporary street cleaning gig, which would last for only two weeks.

"A something weh mi do on-and-off fi couple years now when nothing nah gwane. Mi did affi tek it because me son grades improve and mi nuh wah disappoint him," she said.

"Him is very humble, and always a smile. Him want fi become a scientist and yuh can see it if yuh get fi know him because him mostly interested in dem things deh," she added.