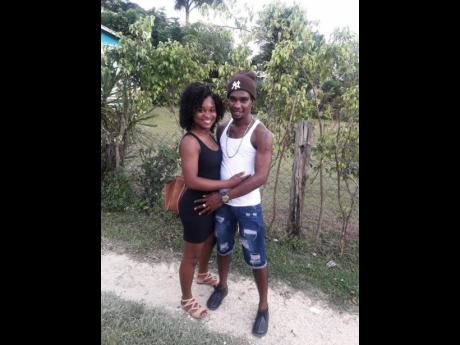 Rory Vassell and his fiancée Janelle.

A Westmoreland couple has been left devastated again following the death of another child in the space of a year.

On Monday, November 22, their son, who they had named Jadair, passed away five days after he was born at the Savanna-la-Mar hospital in the parish.

The newborn, according to the father, Rory Vassell, suffered brain damage from lack of oxygen. The 27-year-old farmer, who has a six-year-old son, said both he and his fiancee Janelle, despite their shattered hopes, are not giving up. Vassell told THE WEEKEND STAR that they are trying to find ways to deal with the emotional pain like taking long walks and talking about the tragedy.

"Although we have had this experience of losing a baby last year, it is still a difficult situation to deal with but I am seeing where we are getting stronger and developing a tighter bond," a tearful Vassell said.

Janelle said it was difficult to describe her emotions. The devastating reality of losing two children in such a short time span is weighing heavily on her shoulders.

"Maybe it is just not my time," she said sadly. Vassell said he believes that Jadair would be alive if the doctors had performed better. He also said that the explanation given by the hospital has left him with more questions than answers. He said that his fiancee was made to wait for hours unattended and was also forced to have a natural birth despite the challenges they were facing.

"I hold them 100 per cent accountable because if they did what they were supposed to in time our son would be here right now. They took too long to decide in the delivery room. They were forcing her to push although she was telling them that she was weak and could not push any further," he said. "She asked for a C-section and they didn't give her what she wanted and when it was too late they went for a doctor who told them that she was not able to push. My son is dead because he spent a long time in the passage not able to breathe because he was not supported by the mother while down there."

Vassell said that a doctor told Janelle that the baby came 'okay' but started to have seizures so they took him to the nursery.

"We filed a complaint at the front desk at the hospital saying we want the best help we could get for him because the doctor told us he may need ventilators and that all the ventilators in the island are full. In the room she sat us down and tried to explain the best way she could that he would probably pass. The following day they called us and we knew it was something bad once they called us," said Vassell. "The paediatrician told us the baby came out not responsive like normal babies would. The doctor told us brain damage, heart problems, seizures and breathing problems. This is after the first one told my fiancee that the baby was all right before we get to see the baby," he said.

When THE WEEKEND STAR contacted Novelyn Little, parish manager for Westmoreland Public Health Services, she said that she was unable to comment.

Regional director of the Western Regional Health Authority, St Andrade Sinclair, redirected queries to Little, while calls to the phone of Camile Lewin, CEO of the hospital, went unanswered.