Government committed to using effective measures to drive down crime 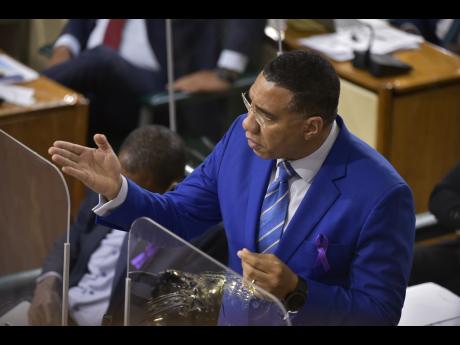 Prime Minister Andrew Holness, says that the Administration is committed to driving down crime by using “very effective” measures at its disposal, such as the States of Public Emergency (SOEs).

“I don’t think the country should be deprived of the use of these tools, when they are clearly defined as to how they should be used and especially when it is clear that this Government is making every effort to ensure that the rights of citizens are protected,” he said.

The SOEs, which were announced by the Prime Minister on November 14, are currently in effect in St. Andrew South, Kingston West, Kingston Central, and Kingston East in the Corporate Area, and St. James, Hanover, and Westmoreland.

The Prime Minister pointed out that the security measures have proven to be effective in reducing murders in the communities in which they have been implemented.

Prime Minister Holness noted that there is already a trending down of murders in the Corporate Area police divisions.

He informed that for the first 10 days of the SOE, four murders were recorded in St. Andrew South, Kingston West, Kingston Central, and Kingston East, which is a major reduction over the 14 murders for the 10 days before implementation of the security measures.

The tri-parish of St. James, Westmoreland, and Hanover, however, saw an increase from seven to 10.

“So overall… the murders have reduced by seven in the first 10 days compared to the 10 days prior to the calling of the SOEs,” Mr. Holness said.