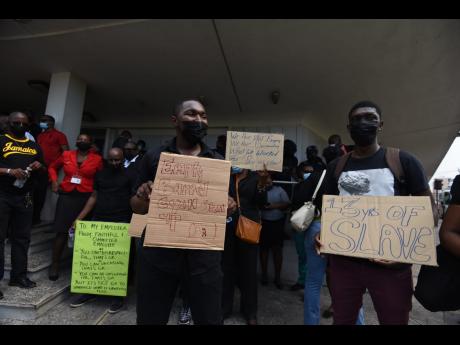 Hundreds of police personnel clad in black are now at the Supreme Court building awaiting the verdict on their 40-hour workweek and overtime claim.

The verdict is to be handed down by Justice Sonia Wint Blair.

Ahead of the hearing, cops have gathered outside the court building in downtown Kingston, some with placards.

The Jamaica Police Federation, which has brought the suit against the Ministry of Finance and the Public Service and the Ministry of National Security, complain that the police have been working more than 40 hours per week without being compensated.

Since the claim was filed in May of 2020, there have been discussions between lawyers for both sides.

The matter was again brought before the Supreme Court for an agreement to be announced on an application by Government lawyers.

Althea Jarrett, QC, the lawyer representing the Government, said that the ministries had not yet communicated their final proposal for payment.

The cops say they are owed overtime payments since 2008.

According to the federation, cops were willing to forego the claims from 2008 to 2014.

However, the Government wants them to forego the claims from 2008 to 2018.

The government would then compensate cops over a six-year period for claims dating back to 2019.

The federation has rejected this, pointing to the potential impact of inflation.

Instead, it would accept payment on claims since 2015 and agree to a portion of the retroactive payment now and the balance in the next two years.

The group has calculated that over 10 years hours of overtime equivalent to $1.5 billion have been worked by cops each week processing crime scenes, attending court and providing protection for Government officials.