50 per cent increase in onion production 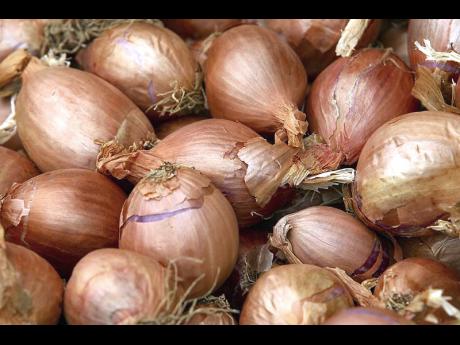 The Ministry of Industry, Commerce, Agriculture and Fisheries is reporting a 50 per cent increase in crop yield under the Onion Development Programme (ODP), which was implemented over a year ago.

Director General Don McGlashan says farmers have indicated a significant increase in their harvests, which he notes have doubled the 12 tonnes per acre averaged since cultivation of the vegetable commenced locally during the 1960s.

"We have demonstrated in Colbeck, (St Catherine) and other areas (where the initiative is being undertaken) that we have raised productivity ... to (between) 20 and 25 (tonnes) per hectare," he revealed.

The Director General was speaking at a farmers meeting at the offices of the Colbeck Water Users Association in St Catherine recently. McGlashan said the programme was instituted as part of the ministry's import substitution initiative.

He explained that farmers are provided with technical support by the ministry, as well as assistance with irrigation and other inputs, to facilitate cultivations.

The Onion Development Programme is funded through the ministry's capital budget and the Government of Jamaica's Adaptation Fund Programme, as well as inputs by farmers, among other stakeholders.

The initiative is expected to increase onion production, positioning it to satisfy at least 70 per cent of local demand, up from 12 per cent at the end of 2015.