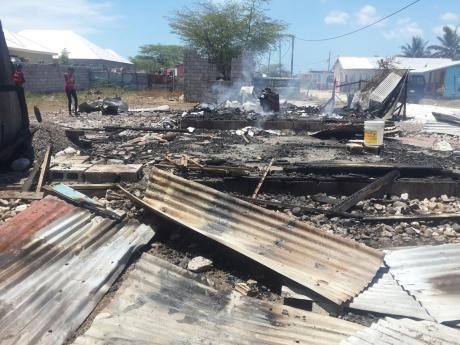 Shanique Samuels This remains of a house in Portland Cottage that was razed by fire earlier this month.

STOP TRYING TO TAKE MY KIDS

People have reportedly swarmed down on 30-year-old Stacy-Ann Murray, the mother of nine children in Portland Cottage, Clarendon, seeking to take her kids from her.

Murray's house was burnt to the ground by fire of unknown origin earlier this month.

Since THE WEEKEND STAR brought worldwide attention to Murray and her family's plight on April 6, she has received positive calls from charitable souls eager to help. But she has also received attention from persons eager to help make an unfortunate situation even more unfavourable.

Some callers, who she describes as insensitive, made no bones about criticising her decision to have children ages 12, 10, nine, eight, six, four, one and a half years old and three months old. Others have offered to adopt them.

With many criticising her, Murray says she is offended.

In fact, the mother of nine cited what she believes are relevant words to live by, paraphrasing the popular scripture Genesis 1:28 in which God told Adam and Eve to be fruitful and multiply.

"Mi never plan fi have nine children, dem come. But I'm a human being," she said, adding that she is blessed to be able to have her children. "The Bible said woman should not have abortion, she should bear whatever fruits she can bear."

She also explained that she originally had 10 children, but one died. And, since she has already given one of the nine remaining kids to the respective father, Murray insists that she will not be giving her children up for adoption.

Unashamed of having nine children with nine different fathers who sometimes assist financially, Murray said she provides each offspring with the required love and care.

"If it wasn't for the fire, nobody wouldn't know about me and my children," she said, adding that her kids lack nothing.

Nonetheless, things appear to be looking up, as Food for the Poor has quickly stepped up to rebuild a structure for the in-need family. But for the time being, the family has been allowed to stay at a vacant premises in her community and Murray continues to receive donations to help her rebuild her life.

"There are so many nice persons out there, and thank God for those people. I would like to say thanks to the people dem that help me," she said.