Use of mortars saved lives 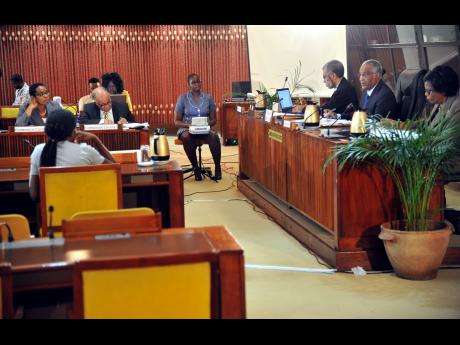 A Jamaica Defence Force (JDF) mortar expert has conceded that the use of the explosives during the May 2010 operations in Tivoli Gardens would have caused "a measure of shaking" to buildings in the community.

Major Warrenton Dixon testified before the west Kingston commission of enquiry yesterday that the shaking would have been felt within a 100-metre radius of where the mortars landed.

"It's not of an earthquake type thing [the shaking], but you will feel some amount of vibration if you are close enough to it," Dixon sought to explain.

Several residents of Tivoli Gardens had given evidence before the commission that they felt their homes shake as the 'bombs' landed in the west Kingston community.

Dixon, who was the army's mortar fire control officer at the time, revealed that a total of 37 mortar rounds were fired during the operation, but indicated that only two were fired inside Tivoli Gardens.

According to his testimony, the two 81mm mortar rounds, one of which did not explode, were fired into the football field located near the community centre at approximately 12:40 p.m., nearly two hours after the 11 o'clock launch of the operation.

Of the 35 remaining mortar rounds, Dixon testified that 12 were fired two minutes before the launch of the operation, while 18 were fired at approximately 12:08. According his testimony, four of the mortars did not explode.

The JDF mortar expert, like retired army chief Major General Stewart Saunders, explained that the explosives were used with the objectives of keeping women and children indoors and to disorientate armed thugs who were engaging members of the security forces in fierce firefights.

However, attorney for the Office of the Public Defender (OPD), Lord Anthony Gifford, pointed out that the witness statements of several JDF commanders indicated that the mortars were fired well before they were deployed into the area of operation and questioned whether they were used to "terrorise" the people of Tivoli Gardens.

"I am suggesting to you that your salvo fired at 10:58 was totally useless so far as any disorientation [of gunmen], prevention of women [leaving their homes], or any other purpose was concerned?" Gifford questioned.

"The disorientation and compelling of women and children to stay inside is an effect the mortar was supposed to create, not an effect that is created if there are security forces in the immediate area to capitalise on," Dixon replied.

"So I wasn't waiting on them [security forces] to be on spot per se and being engaged per se to fire. I was doing it just before to create the environment," he explained.

More than 70 civilians and one member of the JDF were killed during the operations aimed at capturing drug kingpin Christopher 'Dudus' Coke.

However, the JDF mortar expert insisted that the use of the mortar saved lives.

"It's unfortunate that 70-odd persons lost their lives in there ... I take no joy in that, but I believe strongly, in my heart, that the use of the mortars saved a lot of lives and I am proud of it," he