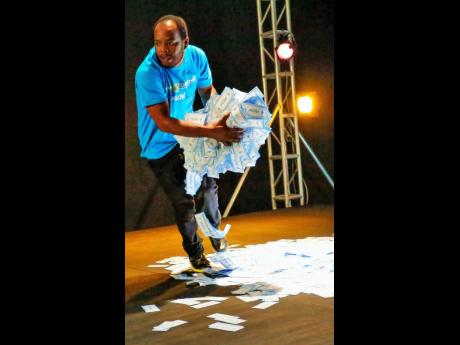 Thirty-five year old Dwayne Haughton is now more than $1.2 million richer after being selected as the first grand prize winner in the FLOW 'Merry Up' Christmas Promotion.

Haughton, who hails from the second city of Montego Bay, was selected as the first 'Cash Grab' winner. After being given a mere 45 seconds to secure as much FLOW cash as he could, the store clerk is now satisfied with his whopping $1,250,500.

He confessed to being very surprised with the total after it was counted by the auditors. "To me,

"When mi get di call, I wasn't having a good time. I was at home, and I didn't believe", Haughton who has a nine-year-old daughter explained.

"I will be spending Christmas with my family and friends and making sure my daughter's school fees and book are taken care of" he added. Dwayne also intends to complete tiling work on his home with a portion of his winnings.

Carlo Redwood, FLOW's Head of Marketing and Products, said the Merry UP promotion is the company's way of giving back to its customers and helping to make the Christmas season even a little brighter for its winners.

Over the next four weeks, approximately 120 more FLOW customers will win a combination of 48" Samsung Curve televisions, $25,000 cash prizes, tablets and phones from the company. Before December 25, another lucky grand prize winner will be selected for another "Cash Grab". The FLOW Merry UP Christmas promotion is open to all residential FLOW customers (landline, broadband, mobile, mobile internet and cable television).