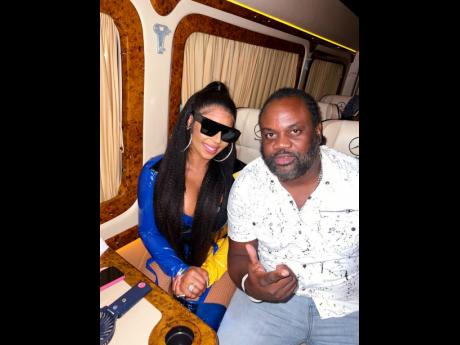 Ashanti and Breadback after her performance at Hennesy Artistry in Barbados.

Grammy-nominated producer and engineer Richard 'Breadback' Bramwell is a man who prefers to allow his productions to do the talking, and is usually all about business.

However, on his recent trip to Barbados as a member of reggae artiste Sizzla's entourage, Breadback stepped in the spotlight for a minute with R&B superstar Ashanti.

Sizzla's producer and engineer told THE WEEKEND STAR that Ashanti is special and that it was "a dream to meet her in person" at the Kensington Oval, where she and Sizzla were among the acts on the successful Hennessy Artistry concert.

"Ashanti is my crush," Breadback said simply. "I grew up listening to her. I saw her at Fully Loaded years ago but I didn't get close enough to speak to her, and I didn't get to see her at YUSH the other day, because we were overseas performing at an event. But, this time, after watching her wonderful performance, I was escorted to her bus and I waited as she entered and calmed down, after coming directly off the stage."

Then it was the time for the introduction, which he captured on his cell phone, and showed just how mesmerised he was.

"Well, that moment ... mi nah seh speechless," he said with a laugh. "Mi ketch back myself. I told her, 'Hey, you are my crush yuh know.' And she laughed. Then we chitchat a little and I took a selfie. Big thanks to Alison, the promoter of the show."

Breadback shared pictures and a video to social media and has been getting quite a few likes; but in reality, it is back to business for the workaholic producer. He has just completed a project with up-and-coming singer Kimeco. The album is tiled Unknown Queen. Breadback has faith in the artiste, but he admitted that it is a challenge to break artistes in Jamaica.

"Actually, I heard her on a track and couldn't believe that it was really her, because she had this gangsta image. So I told her to sing the song for me and she did. I encouraged her to stop sing gangsta song and she heard me, so I'm working with her. But I'm having a real problem getting airplay for her here in Jamaica. Overseas, it is much easier. But that's how the business works," he said.

He has also done a collaboration with Bounty Killer and Sizzla, which he hasn't released yet because Bounty wants it for his long-delayed King of Kingston album.