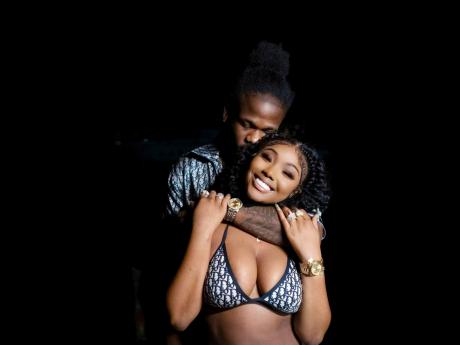 Starr Dawkins, also known as Star Gyal has denied having an intimate relationship with recording artiste Jahshii, but says that the chemistry between them is undeniable.

The owner of the popular Sweet Cookie Wash brand-turned-recording artiste, who collaborated with Jahshii recently, told THE WEEKEND STAR that, "chemistry makes a song come together and a video better", and described their single 4Life, as a hardcore dancehall love song.

"Me and Jahshii met one night at Taboo, and instantly we had chemistry like the moment we linked up, and was talking in the club a little bit. There was also that unspoken chemistry where we don't have to say much. I'm also great at acting, to make it look like I'm in love, or like I hate a person, so it made our production believable. We're just friends," Starr Gyal said.

Starr Gyal praised the Born Soldier deejay for his caring qualities and anticipates that because of the chemistry portrayed, people will recognise the authentic dancehall energy and be inspired to sing along and continue streaming their music.

"I think he has a lot of amazing qualities. For one, he did not charge me, and never suggested anything in the lines of sex for us to do the song. He helped me put the video together with a few days' notice, was cooperative and stayed late even though he had other obligations. The best quality about Jahshii is how considerate he is to me, that he thought to give me the slippers off his feet when I had to take my boots off while on set, among other things, like opening doors and making sure I had food to eat," she said.

Speaking about critics who label her songs as 'too raunchy', Starr Gyal added, "I feel like with so much chop and gun songs circulating, people will find the love music and vibe refreshing. My opinion remains the same. I always say there is a song for everyone. If my songs aren't for you, then okay, it's for someone else ... everything ain't for everybody."

Having previously been in a high-profile relationship, she expressed that she has not even considered going in that direction again. She also stated that "it's weird" when persons refer to her as her 'last boyfriend's ex'.

"To be honest, I haven't thought about if I'd even date him and I know he don't wanna date me. I don't want my identity to be about my ex or any other man and I'm working to make that happen. Take Beyonce, for example, she is with a well-known artiste, but nobody says Jay-Z wife, which says a lot about the legacy she built. I'm building mine," she said.