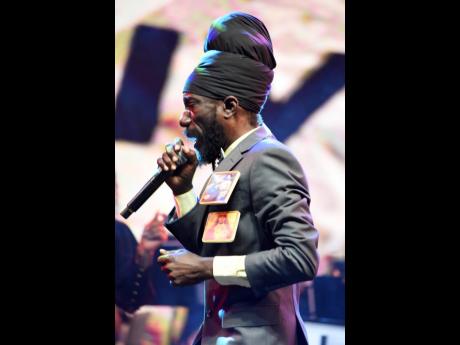 He started a live broadcast on Instagram earlier this morning to share his outrage with fans and also posted the saved reels to his timeline.

The artiste, with the help of members of his entourage, dismantled and burned plaques presented to him to commemorate the Recording Industry Association of America (RIAA) platinum certification for two of DJ Khaled's albums on which he is featured.

The Run Out Pon Dem artiste-songwriter proceeded to remove images of DJ Khaled's son -- Asahd Tuck Khaled -- who is credited as executive producer for the Grateful album from the plaque, noting that "babies are innocent".

"Yuh insult me DJ Khaled," Sizzla stressed throughout the live.

Later in the video, he stated that, "Asahd ah di boss".

Sizzla received one plaque for the Grateful album, which was certified double platinum in January this year, for combined sales and album-equivalent units of over 2,000,000 domestic units, making it DJ Khaled's best-selling album. He is featured on the title track I' m So Grateful.

He did the same to the plaque presented to him for more than 1,000,000 million copies of DJ Khaled's 11th studio album titled Father of Asahd, released in 2019. Sizzla is one of the featured artistes, along with Buju Banton and Mavado, on the Holy Mountain collaboration.

Though the reasons for Sizzla upset were not clear, he shared that his name was not visible on the plaques.