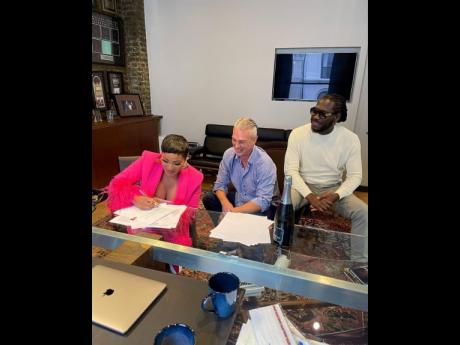 The female dancehall sensation made the announcement on her Instagram page a short moment ago, where she expressed gratitude to Moxey and her team. She especially thanked music producer Skatta Burrell, who was present for the signing, "for always believing in me". "I'm so happy to share this moment with you," added the Pot of Gold entertainer.

She ends her run as an independent artiste just a little more than two months after releasing the long-awaited collaboration with Grammy Award-winning singer and songwriter Ed Sheeran titled Brace It.

Ishawna's controversial Equal Rights remix of Sheeran's 2017 hit single Shape Of You stood out for the artiste named the most-played artiste in the United Kingdom in 2021.

"It's so good," Sheeran told Domien Verschuuren in an interview last year on Qmusic Nederland.