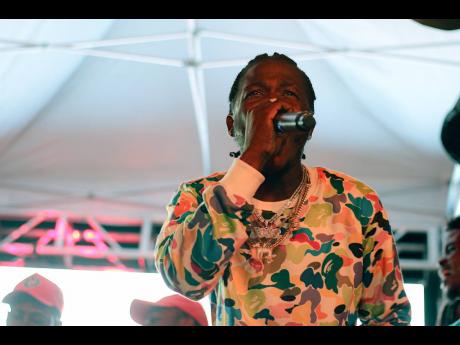 While not confirming or denying in what direction he would be taking his music, the artiste has addressed vloggers who he said are putting him in a bad light.

"Some vlogger feel like dem a guh call up people name fi mek money. A nuh suh it work bredda," Jahshii expressed during his recent performance at Dragon Spitfire Fridays. The event saw the artiste passionately singing about the struggles of staying ahead of others.

Speaking about his comment on stage, Jahshii told THE STAR, "The vloggers might want me to seem bad or look bad, but remember, all strong man a go get fight, [so] me just want me fans listen me music and feel me pain."

He continued, "Me just want people to see my journey and realise seh me a sing about my lifestyle, nobody else's. Me love me people them, me fans always a blessing and for me to do what I can do, what I love and see me them ah enjoy it."

For the past couple of weeks, the Cream of The Crop deejay has been entertaining a lyrical war with Silk Boss, who is rumoured to be the artiste he will be clashing with at Sting in December.

"We just a make good music and giving the people them good music; and from a show, the show haffi get bun down. They gonna get all them want soon," he said.

Last Friday, members of the First Nation camp, guided by popular selector Boom Boom, performed before Jahshii touched the stage. He performed hits like Born Fighter, Stronger and Same Way Suh, and a short verse of his latest single, Miggle Day, which, within 10 days of its upload to YouTube, garnered over 750,000 views.

"I love these events because they are for the streets, and I am the streets," Jahshii concluded.