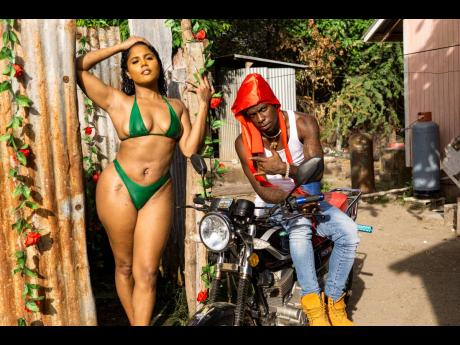 Denyque and Rytikal behind the scenes of their music video shoot for the single ‘Knees’.

Female recording artiste Denyque has long been a champion of body positivity but she admits not liking the changes her own body experienced having gone through pregnancy twice.

"There was a time I didn't like myself. I felt ugly and just not like me, which is normal for many women after giving birth. But I have fallen in love with this version of me. I've put on a lot of weight and just had to get to like myself again," Denyque told THE STAR.

The Make Me Believe You singjay has five-year-old son Connor and two-year-old daughter Dylann. She has embraced every stretch mark and curve from becoming a mother. She said that she is ready to reveal this to the world and there is no doubt that her fit 'mom-bod' will bring men to their knees.

Her latest project produced by Good Good Productions, which is actually titled Knees, features fast-rising star Rytikal. It will see the dancehall diva taking a walk on the wild side. After revealing behind the scenes footage of the music video on Instagram, Denyque has fans excited to see and hear the full project which is set to be released on Friday, August 26.

"The biggest satisfaction for me is not people ogling over the video, but I want women to realise you have it in you too ... don't wish you could be someone else. My confidence doesn't come from outside but inside. I don't know my 21-year-old self but I also needed to adjust to my 33-year-old self. It all starts with finding different ways of falling in love with ourselves," she said.

She expressed that the track is sexy, suggestive and straightforward but "not in your face" because it is filled with puns and there is much to be interpreted by the listener. It was previously titled Take Me To My Knees, but she accepted Rytikal's suggestion to shorten the title. The track is recorded on the 'Young Generation' rhythm and is the first of three projects the artiste and her team have plans to release this year. It is also the forerunner for Denyque's first full album.

"It is my first time recording or working with Rytikal and it was on a whim, seeing him in the studio one day and just asking him to jump on the track. I never imagined recording with him because I was also guessing what we would sing about and just saying if it happens, it happens and when it does, we'd figure it out. We did figure it out," Denyque said.

"We [her and her team] have two more tracks and I am happy to just know I am inspiring women and gaining new supporters as I continue to work on my album. I don't have a date yet but I am excited. The message I really want to leave with people is you can do anything and be anything you want; be a mother and still be a singer, a dancer, a businesswoman but don't seek validation from outside. Set the rules for yourself and have fun doing it at the same time," she added.