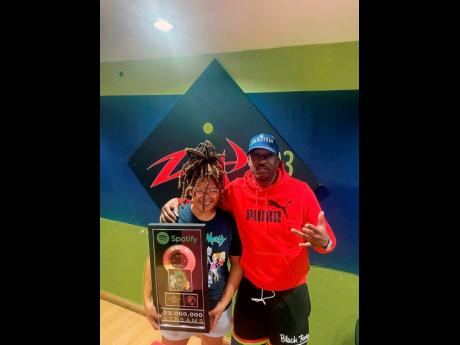 Popular radio disc jockey ZJ Sparks recently received a Spotify plaque for her support of Soulja Boy's hit single Rick and Morty, which she said was a token of appreciation from the artiste.

Speaking to THE STAR, ZJ Sparks who is also a Grammy Award-nominated producer with her own record label, said that while she had no hand in the production of the US entertainer's song, it was a regular addition to her sets.

"Personally, I just like the track. It is a fun and catchy song," Sparks said. The plaque commemorated more than 23 million streams on Spotify.

She continued: "I was surprised. I was actually on air and saw the customer service representative enter with some people I was not familiar with. I hadn't even seen the plaque yet cause I was in shock."

ZJ Sparks, given name Tricia Spence, is one of few female disc jockeys and producers who has been advocating for local music while making it part of her mission to expose persons to other cultures.

Soulja Boy emerged in the US in May 2007, at age 16, with the song and dance Crank That which became a number-one hit that September for more than five consecutive weeks. Last year he made a comeback with She Make It Clap, then released Rick and Morty, which is named after a popular animation series which inspired a wave of dance videos that trended on TikTok.

"I suppose word got back to Soulja Boy and his team and this is just how they decided to show their appreciation," Sparks said.

When asked if there were any possible collaborations or productions with Soulja Boy coming out of her Twelve 9 Records label, she was tight-lipped. She has been behind several dancehall hits including Indicator by Spice, Shake by RDX and Yuh Body by Busy Signal. She also contributed to the high-energy 2020 soca remix Run Up and Down, featuring Ding Dong, Mr Killa and Dan Evens.

"Right now I am just honoured. There are many female creatives but they probably have other interests like engineering, videography, editing, writing storyboards, set design, choreography, styling, tour management and the list goes on ... mine just happens to be music," she said.

The plaque was presented to ZJ Sparks by Theo Brown, manager of Soulja Boy's record label SODMG, he said that it was a symbol of appreciation.

"She supported this record before a lot of other DJs," he said. "It should show artistes that keeping that level of respect and appreciation to DJs is key. Being from the States, I wanted to show love to the island, culture and business."