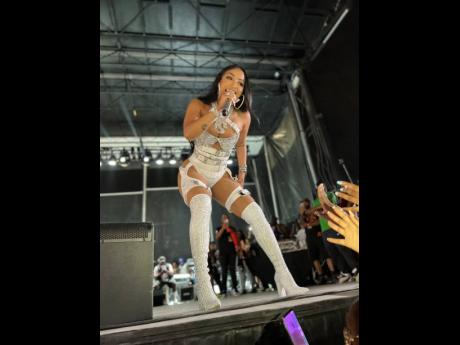 Shenseea in performance at Kingston Fest in Toronto last Sunday.

Last Sunday’s Kingston Fest was transformed into a “human zoo” when a stampede broke out and barricades set up to separate general admission ticket holders from the VIP section were broken down as people pushed towards the stage at Downsview Park in Toronto.

Later, more hooliganism erupted when they closed in on the barriers set up to secure the fibre optic cables that control the sound, when the irate concertgoers could see, but not hear, the performances of Skillibeng and Shenseea. The loss of sound, along with complaints of a shortage of water and beverages, skirmishes and incompetent security personnel plagued the mega event, dubbed Canada’s largest one-day outdoor dancehall festival.

It was left to headliner Popcaan to pacify the crowd – 11,000 ticket holders plus thousands of others who rushed in for free – with an hour-long set. While on stage, he blasted organisers for their inept delivery of what should have been a trouble-free event, telling promoters to “fix up”.

However, Dwayne Hines, head honcho of the Canadian part of the Miami-based Kingston Festival Music Group, explained that money for refunds can’t “magically appear without the performers’ help”.

“Is he going to refund that money so we can refund the people? This would also mean that Skillibeng, Shenseea and Chronic Law would have to give back as well,” he said. “In any event, and within our insurance guidelines, we delivered a festival and a show where all four artistes arrived and performed.”

He acknowledged that Shenseea and Skillibeng were booed because patrons were unable to hear them.

“We feel extremely bad for them because they were counting on [debuting] a new song they have together,” said Hines. He then announced the Reconciliation Concert, to be held in November. The promoters plan to offer 50 per cent discount off general admission and 100 per cent for VIPs with proof of payment, the scanned Kingston Fest tickets and/or a credit card transaction. Tickets bought online would have a confirmation email.

However, some patrons are not convinced, one describing Kingston Fest as a disaster.

“Aside from running out of water early in the evening during a heatwave, where people were fainting, the disgusting behaviour of some people was unacceptable and could have been dangerous. The promoters should step up their game with better security, that would help. I didn’t feel safe,” said the patron.