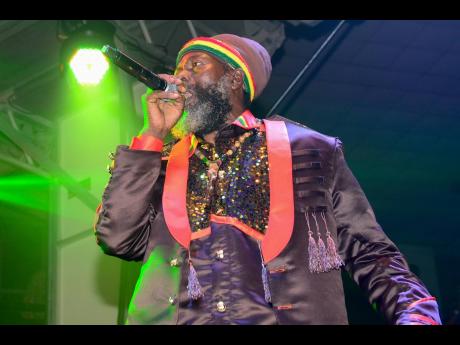 Capleton performing at the 2018 staging of A St Mary Mi Come From which was held at the National Arena.

Reggae veteran Capleton has confirmed that his annual charity show, A St Mary Mi Come From, will not happen for 2022.

He told THE STAR that the team would prefer to have a better opportunity to market and promote the show.

"True di thing, the entertainment sector, take so long to come back and then the place open up so sudden, we never have the amount of time needed in terms of promotion," Capleton said. "We a breeze it likkle and next year the plan to come back fully."

For more than 15 years, the stage show has generated funding for charitable projects in St Mary, which is the artiste's home parish. However, for its 14th staging, the annual show was held at the National Arena in St Andrew. The show was not held in 2019 and Capleton's team had anticipated bringing it home in August 2020, before the pandemic affected the staging of live events. Capleton did not share where the show would be held but stated that he would want to do something for the parish as it has been a while.

"A St Mary Mi Come From a one of the biggest charity show in Jamaica and it go on for years with us giving back so much. It is not something we doing for clout but because we love to give and giving is the act of sharing and God," the That Day Will Come artiste said. He opined that St Mary has given birth to many talented people and that while he believes it has everything for families to survive and is the best place to raise children, "we need a stadium".

The reggae-dancehall veteran said that for a parish to be producing so much talent, there needs to be a proper centre and venue for large events to be held. The charity show was first held in Clements Park and over the years, outgrew the venue. A major challenge in hosting the show has been heavy rainfall that has previously flooded locations and even caused the cancellation of the show in 2019.

"Our parish just needs a stadium and even nicer football fields for the youths, and the people them to use," he said.

Capleton, whose given name is Clifton Bailey, was recently involved in a motor vehicle accident in St Thomas and was transported to the Andrews Memorial Hospital in St Andrew where he was treated and sent home. He is recovering well, he said, following his performance at the fifth staging of Thursday Night Live Acoustic Inna Di City last week. He is expected to be in St Ann for the National Community T20 Cricket finals on August 21 before heading to Trinidad and Tobago and then Costa Rica.