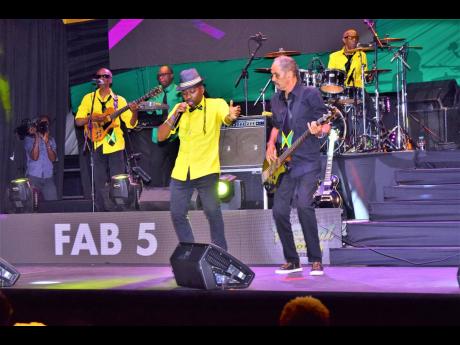 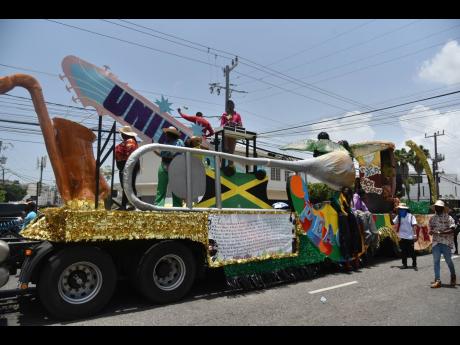 One of the floats participating in the Emancipation Day Float Parade in the Corporate Area yesterday.
1
2

The musicians of the veteran band Fab 5 congratulated Minister Olivia 'Babsy' Grange "on a job well done" for the Jamaica 60 Float and Street Parade yesterday.

The parade, which marched through St Andrew's main thoroughfare from the Ranny Williams Entertainment Centre to the National Stadium car park, featured the band in the Sounds of Jamaica section.

Speaking to THE STAR following a three-hour-long live performance during the parade, music producer and Fab 5 band leader Astley 'Grub' Cooper said, "This was a wonderful idea and we applaud Minister Grange for bringing it back into festival celebrations."

"As musicians we are thankful for the experience and we urge Jamaicans to celebrate after this, meaning they should continue to acknowledge the 60th year because it goes on past August 1 and August 6," he explained.

Cooper further explained that while Fab 5 was to play past Festival Song Competition entries , the reaction of the people to them in the streets was much to be acknowledged.

He said "The people were definitely in tune to the sounds as much as the sights. It really felt good but I believe it would help to have more musicians and conscious singers featured. It may not be economically feasible to have two trucks or floats, but if not in the parade, to have a concert at the end of the parade. This one sort of ended abruptly, even though we know it's because the Festival Queen Coronation would commence."

Fab 5 could be heard playing memorable tracks of popular Festival winners including Roy Rayon's Give Thanks and Praises and Love Fever, which was written and arranged by Cooper, The Astronauts' Born Jamaican and Mek We Jam and Eric Donaldson's Land of My Birth, Proud to be Jamaican and Cherry Oh Baby, all as spectators sang along.

"These festival songs and other songs celebrating Jamaica's history need to be out by the latest April [so] our people can be familiarised with the lyrics and rhythm, just like they are with the older releases. It's only been a week since the winner was selected and the song has not been absorbed properly," said Cooper.

The musicians also injected their recently released single Celebration Train as part of the playlist.

"Although we didn't enter it into festival, it's about Jamaica. We're celebrating 60 and we believe everybody must come aboard the celebration train," he said.

Cooper said that the more songs that Jamaicans, both local and international, have, the better they will feel to celebrate.

"We need more songs and more showcases showing ethnic diversity. Let's all work to upgrade the product we're putting out for the rest of the year and the future and make it a melting pot, because that's what Jamaica is," Cooper said.