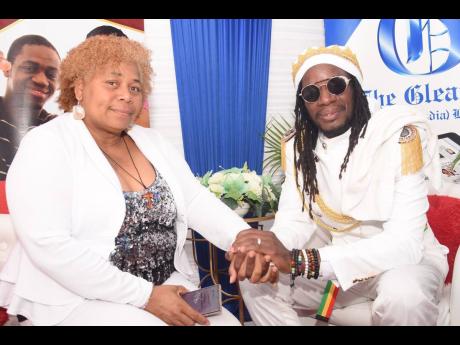 Lawgiver The Kingson (right) and wife and manager, Dawn.

Lawgiver The Kingson celebrated his 47th birthday in style on the stage at Reggae Sumfest.

As one of the artistes billed for the second and final night of the music festival, Lawgiver The Kingson said that the goal was to leave a lasting impression on the local audience -- which he did.

Noting that he shares the same birthday as Haile Selassie I, the Lawgiver, told THE STAR, "He is the king, and when a king comes out, he must have a regal look. I knew I had to represent in a regal way hence the white and gold."

He continued: "I was styled by my wife, Dawn Phoenix, whom I have been married to for 13 years. She has been a great support for me and my career."

The Lawgiver, whose real name is Oneil Phoenix, emerged on the scene in the mid '90s. In 1997, Bounty Killer produced his first hit titled Bad Smell. Since then, he has been sniffing out the opportunities and has managed to leave his own positive trail both locally and internationally.

"I would have garnered many years of experience, but tonight is an accomplishment as I believe the people received me well. Dem feel the roots and energy from me; that was important," the Lawgiver said.

According to his wife, as an entertainer, his passion is unmatched.

"He loves what he does; he eats, sleeps and breathes music. That is something we share. When he is making a song, I can listen to a rhythm all day, and I enjoy watching him in the creative process," Dawn shared.

As The Lawgiver's manager, Dawn has been taken on added responsibility, from creating websites and posters to executing marketing campaigns.

"I'm in charge of A to Z; cook, clean and wash, everything. As a registered nurse by trade, that assisted me with taking on challenges with managing an artiste...to strike a balance. I love what I do, and I continue to believe in him and his talent," the entertainer's wife said.