Ishawna means no harm — says cardboard cut-outs were for entertainment 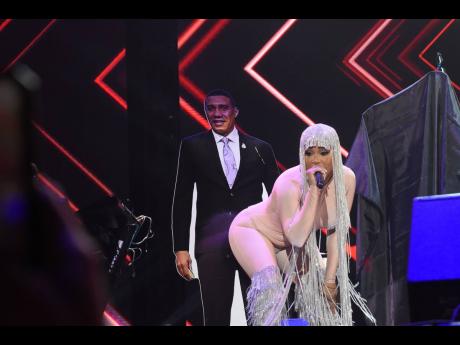 Ishawna dances on stage during Reggae Sumfest festival night one with a cardboard cut-out of Prime Minister Andrew Holness.

Dancehall diva Ishawna says there are more pressing issues Jamaicans and local government should be focused on other than the gimmickry she showcased on the Reggae Sumfest stage.

During her performance, the artiste known for courting controversy, unveiled three life-sized cardboard cut-outs, one of Prime Minister Andrew Holness, another of Minister of Health and Wellness Christopher Tufton and the third and final cut-out of dancehall deejay Bounty Killer. She danced with each but got more personal with the cut-out of of Bounty Killer, which did not please many of the Warlord's fans.

Holding the attention of her audience, wearing a full bodysuit and dripping in rhinestones, she danced over Bounty Killer's cut-out to her single Equal Rights, an action which she does not believe has made her lose any fans.

"I sat on a cardboard box," Ishawna told THE STAR. "It's all just entertainment."

She said she is not worried about any backlash or concerned about it upsetting any of the three public figures.

"It's sad and depressing that particular case; I have a lot to say about it because I don't believe anything is being done. It should be addressed publicly by public figures," she continued.

As a female artiste who is not afraid to speak her mind, Ishawna shared that Jamaicans need to be more focused on transforming themselves and their communities and coming together for the improvement of the country.

"Overall, I think we need to just come together together... this is the stuff we need to address. People can't be left to think that it's okay for someone to hurt someone and get away with it," she said.

Ishawna, who is the mother of a 16-year-old teenage boy, shared that one of the most important lessons she has imparted to her son is to treat women with the utmost respect.

"It's about how you are raised as well. He (her son) knows love, [so] he shows love, and that's very important. I try my best to be an example, but I still can't say I can predict how he will act or say that he is perfect or I am perfect, but I show him a lot of love," she shared.

Ishawna knows the world is at her feet following her collaboration with Ed Sheeran titled Brace It, for which she will release an official audiovisual project for soon.

In a recent interview with THE STAR, she said she had intentionally been absent from the stage since 2020 to create new music. Having delivered on Festival night one, she was left feeling pleased with her performance, stating that "it feels great to be back on stage".