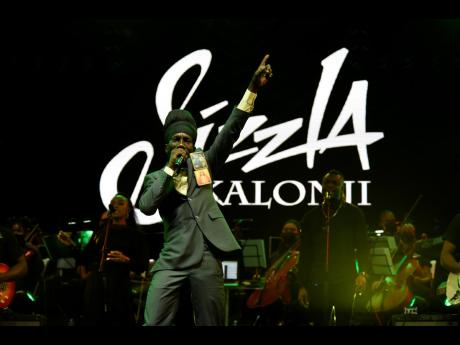 However, contemporary reggae entertainer Sizzla, who was one of the later acts to be added to the 2022 line-up, is not the least bit intimidated.

Speaking to THE STAR, the Solid As A Rock artiste expressed joy to be gracing the Reggae Sumfest stage in front of a physical audience again. Sizzla did his first-ever virtual performance for the 2020 staging, dubbed 'A Taste of Sumfest', and prior to that, he brought his fire to the show in 2018 and 2017.

"I feel happy and energised to deliver to the world [what will be] one of my best performances ever, supported by a great band and some very beautiful and talented girls for this festive season of Reggae Sumfest," Sizzla said.

The artiste, who is known for his signature chants and conscious lyrical composition, has paved the way for other talents, including musicians on the 35-piece orchestra. Fans are curious to find out whether they will be accompanying him.

"For now, I know I'm working with the given band, Ruff Kutt, but I'll definitely have the harmonies along with me and females dancing, to add to the entertainment. The orchestra decision would have to come from the directors of the show," he said. In preparing his set, Sizzla explained that he remains well informed on current affairs and issues that fans have brought to his attention, to properly select tracks and create a playlist that will make an impact locally and globally.

Sizzla shared, "By checking the state of the country's affairs, you know, what bothering people, and again, focusing on what I would like to personally teach them, I make my moves from there. I also think about including their favourite songs of my catalogue."

Sizzla is set to perform on Festival Night 2 on Saturday, July 23, which also features reggae acts Beres Hammond and Koffee. There will also be a Madhouse tribute to legendary producer Dave Kelly. July 23 is also the anniversary of Emperor Haile Selassie's birth. It was the preferred date of choice for the release of Sizzla's Rise Up album, but the distribution company had already set it for July 22. It is the third and final album to be produced by Sizzla's label, Kalonji Music Production, for a distribution deal with ONErpm and he is "still celebrating its release being on the eve of the Emperor's 130th birthday".