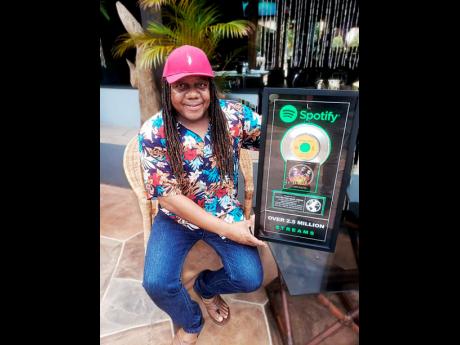 Sean 'Contractor' Edwards is still riding on the success of the single Soy Una Estrella, which was released in April 2021 and received one million streams on Spotify within the first week.

Last Friday, Contractor, who is the executive producer for the song, collected the Spotify Award for streams of over 2.5 million in one month, and the accolade has him aiming even higher with the year-old production.

"I would like to acquire sync licensing for the project, to see it licensed to use in movies, sitcoms, TV shows, commercials and video games," he told THE STAR.

He shared that in an effort to get a start on having the music he helps create included in TV and film productions, he has launched a new YouTube channel titled Contractor Films.

Contractor said, "The plan is to use songs I have produced or collaborated on, featured in short independent films which will be placed on the channel."

"One thing I must highlight is that it has always been a collaborative effort. Jethro Sheeran, cousin of Ed Sheeran, is part of the team. He has over 250,000 monthly listeners on Spotify. He brings that knowledge and expertise to the table [so] we have placement on major playlists on the platform," he said. "Sasaine Music Records, responsible for the rhythm, did an amazing job with the project. Mexican reggae artiste Jah Fabio knows the Latin American market well and he did all the interviews and marketing for the track. I may have conceptualised it, but the execution was one of unity."

He said the next step is getting more entertainers and producers on a global scale to unify for his upcoming album. Contractor Records in collaboration with Triple Century Records, founded by cricket star-turned-recording artiste Chris Gayle, has embarked on a new project targeting the Asian market.

"The focus is to spread Jamaican culture and combine it with the musical culture of this market including countries like India, Pakistan, Malaysia, Bangladesh and Sri Lanka. This is spearheaded by me and Gayle but the talent also comes from Lauryn Hill, Morgan Heritage, Jason Derulo, Sizzla and several up-and-coming local acts. It's going to be even bigger. I believe if we were able to get 2.5 million streams without any endorsements, there is so much more that can be achieved. We can uncover gold with this new project," Contractor said.