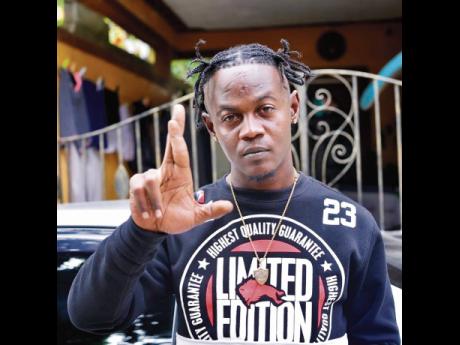 Dancehall artiste 10 Tik has joined the chorus of voices calling for justice for the victims of the June 21 quintuple murders in Cocoa Piece, Clarendon.

In an emotionally charged single, Custom Kill, 10 Tik said that the person responsible for the killings should pay with his life.

"H ow yuh fi ketch dem boy deh and mek dem live and dem a kill likkle pickney? No sentence him! send him out fi a custom kill," the opening line of the song says.

"How yuh fi kill four juvenile? Heng him up and fling him inna cooking oil."

Kemesha Wright, 31, and her four children were slaughtered in their house last month. The police have since charged Rushane Barnett with five counts of murder in relation to the killings. Director of Public Prosecutions Paula Llewellyn has signalled that the Crown will be seeking the death penalty.

10 Tik, known for the song Roll Deep, said he was immediately outraged when he heard the news of the gruesome murders and was in disbelief.

"It became a topic in the household as soon as we heard the news. At first we thought it was a gang killing, then we found out the truth. My mother, especially, was angry, and we kept track of the case from that moment ... It was natural to sing about it since we talked about it so much," 10 Tik said.

The artiste further told THE STAR that he was so perturbed by the incident that he had to record a track to highlight his pain and anger.

"Connection Records had sent an instrumental a few days before I was about to voice on - the dark grimy type of riddim. I got overcome one night after thinking to myself. This is the perfect opportunity and vibe to take my anger out on this murderer that ended the lives of four innocent kids. The producer, Connection Rec, was ready and waiting for a track from me to promote. This was the opportunity. Anger was definitely there throughout the session; however, the greater sense of purpose and destiny was bringing the project together so quickly! We had to do this," he explained.