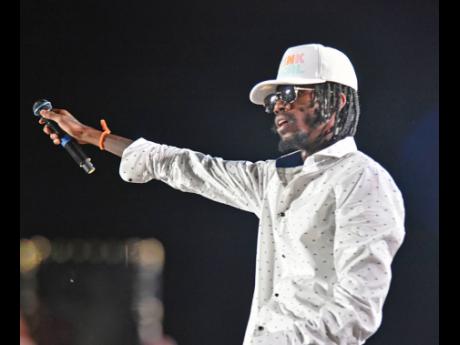 Organisers of the New Rules Festival said they had hoped to secure Stadium East for the 2022 staging of the highly anticipated festival's return to Jamaica.

While unable to give exact figures as to the number of patrons in attendance at last Saturday's event, Rickardo 'Shuzzr' Smith, Alkaline's publicist and co-production manager of the New Rules Festival, said the staging "was bigger than the last", and said "history was created". It is for that reason that they hoped to secure a bigger venue.

"We anticipated a huge turnout and we tried to implement the necessary crowd control measures to mitigate that," Smith said, adding that the organisers were eyeing the Stadium East complex.

"Prior to the event execution, we had secured Stadium East for the 2020 staging but due to COVID-19 and Independence Park renovations the venue was no longer viable. We then had to relocate back to the car park. We wanted to execute in a bigger space that's accessible and would be affordable for the patrons," he said.

Smith told THE STAR that changes would be made for future executions.

"The team will look at our execution challenges and strength and use it as a guide for future executions," he said.

Eager patrons levelled the fences separating the sections during the event. Artistes such as Knaxx, Kacique, Jahvillani, IWaata, Star Captyn, 450, and Aidonia all exceeded the expectations of the patrons, but two names are on the lips of many.

Macka Diamond shined bright, as, among the women which also included Pretti Pretti, Stalk Ashley and Marcy Chin, the Dream Body artiste had the audience going wild for her.

Inviting the mother of one of her dancers on stage, she hosted a mini competition between the two women. The men were not to be left out either, as she welcomed a young man to show how he would "handle a big woman".

"Nuff a dem did a wonder wah me did a do pon New Rules line-up, but the hot big woman is out and she showed what she is made of," Macka Diamond told THE STAR. "There's no holding back this summer. I do not intend on disappointing my fans and showing them that veterans like me still have it."

Meanwhile, dancehall newcomer Skeng delivered a performance of 'rockstar levels', with the support of the band which remixed the rhythms of hit singles with a rock-and-roll flavour. The artiste opened with Gang Bang and closed with Protocol, and in between delivered fan favourites such as London, Heaven Passport and Gvnman Shift as well Talibhan for which Stalk Ashley made a reappearance on stage.

At the centre of it all, Alkaline cut a captivating set. His return definitely left patrons wanting more. The artiste is slated to perform on night one of Reggae Sumfest in a couple of weeks.