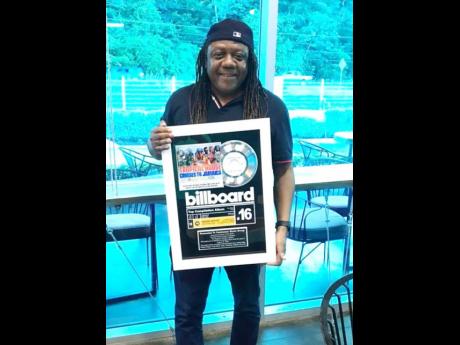 Edwards received a plaque from Billboard last week following the success of his compilation album on the chart in 2020.

He explained: "It feels good to be recognised by Billboard, but we are simply not satisfied with that, and we have many more goals and aspirations to accomplish musically. So we keep working and striving to meet these goals."

As executive producer of a compilation album, Edwards was tasked with networking with artistes and producers whose music fit his criteria for the concept of the album. He then had to narrow down the number of songs that made the album.

"I came up with the concept of having a compilation album targeting Africa. So then, I reached out to my network and licensed the songs from the producers and artistes to put out the album," he shared.

He explained that he was motivated to focus on the African market because "typically, most reggae albums target the three major markets of USA, Canada, and the UK".

"However, Africa has a billion people, and reggae labels and producers don't really focus on sales and streams in that region. So I decided to explore the African market to make an impact there," he said. "When I analysed the African music market, I saw where they like a wide cross section of music. So I know I needed songs for the album with crossover appeal with high energy and clean, wholesome lyrics."

Songs featured on the album include Dream by Shatta Wale, Middle Day by Skillibeng, and Tatoo by Tommy Lee Sparta.