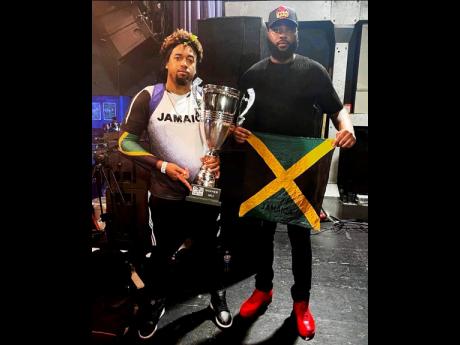 DJ Lank and Chris Dymond show off the coveted silverware after winning the World Clash Sound System competition in Birmingham, England on Sunday.

Chris Dymond of Code Red was quick to highlight that success loves sacrifice as he and colleague DJ Lank made huge sacrifices to ensure preparations were well in order.

"We were very confident. This has been a dream of mine for years and the whole team worked non-stop. DJ Lank and myself were hammered with preparations, no sleep. We woke up at 8 a.m. to link artistes. It's been almost two years since I got a good night's sleep," he shared. Dymond said the victory was one of the greatest feelings in the world.

"This is our Grammy. As a DJ and a selector, we no get much like how you have charts for artistes. Even producers benefit from even getting acknowledgment to say this is on their rhythm. For DJs and selectors, we no have much medium and platform for our work to get respect. So for us as selectors, this is our biggest thing," he added.

The sounds were chosen from Japan, Africa, Europe, the USA, Canada. Code Red was chosen as a wild card to represent the Caribbean. The clash was a five-round competition. In the first round, one sound was eliminated, in the second round two sounds were eliminated, the third round saw three sounds eliminated and in the fourth round one sound had to go, which left two sounds standing.

"Code Red throughout the five rounds was on top until the fourth round we went to dub for dub with Dynamix Sound from Africa and we beat him," Dymond said.

Notwithstanding their recent victory and the commendations that are still fresh, Dymond revealed that as champions Code Red will not fall into complacency or self-praise but will be continuing the work. "As champions, the requirements now is for us to go across the world and deliver quality music, quality juggling, quality sets and represent as champions. We are now ambassadors tasked with going out there with this title on our shoulder as world champion sound."

He described the margin of victory as a clear one. " It was a clean sweep. No discrepancy. From Code Red step out round one and play that dub plate, we had for Romain Virgo and then followed that by the intro we got from Sizzla Kalonji. After those two customised dub plates the stage was set. From there it was a sweep all the way through."