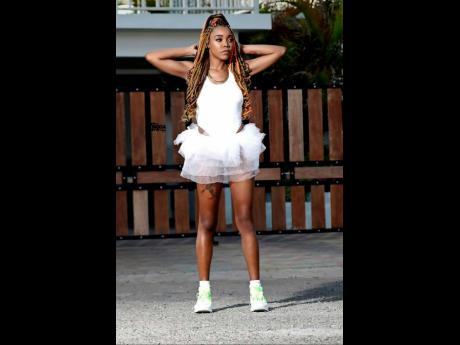 The musical talent of the 2016 female winner of the Magnum Kings and Queens of Dancehall, Clymaxx, cannot be denied. But despite getting an excellent platform from which to launch her career, the Puff and Roll Up deejay is yet to take off in a real way.

The dancehall deejay shared that even with the fanfare and buzz that she enjoyed as Magnum queen, several challenges abound in her musical journey. She identified shortcomings in marketing and limited opportunities to record on big rhythms as two main snags in navigating her career to get to the highest level.

"Basically, I would say the challenge for me would be in getting the music to a widescale audience -- getting it viral," Clymaxx said.

Stating that connections play a major part of the success of entertainers, Clymaxx said that she is not yet "exposed to certain links" that could help in taking her career to the next level.

"Yuh haffi a link with certain people or inna certain clique. Me naah guh say mi anti-social, but me nuh expose to certain links as yet, so yuh will find that getting on a big juggling, mi nuh really get fi go pon dat," she said.

Clymaxx noted that popular dancehall producer Shabdon gave her the opportunity to record on his all-female project, Sexperience. That was when she produced Top Striker, a song about a woman's obsession with a gangster.

"That woulda be my only song on an exposed producer rhythm, or from a producer who is mainstream," she said.

But getting on the big rhythms is not the only factor identified by Clymaxx. She reckoned that she does not have the requisite promotion and marketing for her product.

"I think an artiste needs a good support system, which is a key factor in being a good musician. You need people who will push you and tell you what is right and wrong in regards to you presenting yourself as an artiste. I also think that having a manager is a good thing. Someone who can plan out certain things for you, someone who can also get certain things done in an orderly manner, without you, as the artiste, a pressure your brain," she shared.

Another factor that Clymaxx believes has stymied her growth is her gender. She opined that female artistes have to work twice as hard to be taken seriously, and that many times females have to record raunchy songs just to secure attention.

"Mi even a find myself a try fi sing dem song deh. Those songs are not my expertise, but I find myself singing them because of how high the demand is. If you look at the female artistes weh really popular as female, a that a fi dem specialisation. The demand higher where that is concerned. Mi wudda say that is a requirement as a female artiste," said the deejay, who has dropped songs such as Size Small, Quality and Self Love since the start of the year.

Clymaxx is currently promoting her most recent single, Picket Fence, and is working on an EP to be released next month.