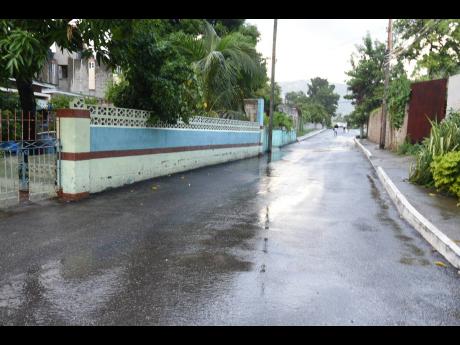 A section of Plum Lane, located off Whitehall Avenue, in Kingston.

"The gunman dem a infect fi place like germs"' is what one resident of Plum Lane said when the news team visited the embattled St Andrew community on Tuesday.

For weeks, gunmen have been trading bullets with each other and several persons have lost their lives as a result. Among the latest victims is 39-year-old Craig Gooden, who was gunned down last week outside his auto parts store last Thursday. There was hardly anyone in sight on Collins Close and Plum Lane when the news team visited. A man who was washing his car peaked when he heard a vehicle approaching. Upon realising it was THE STAR, he seemingly breathed a sigh of relief and refocused on his vehicle. Lottery scamming is allegedly a contributing factor to the feud.

"The scammers dem don't come from here. People will invite them here and what dem don't understand is that yuh can't have dem a set up shop in yuh community because money and pleasure cannot deh one place. It ago be problem," the man said.

Commanding officer for the St Andrew North Police Division, Senior Superintendent Aaron Fletcher, in an earlier interview, told THE STAR that some of the players involved in the feud used their gains from lottery scamming to purchase firearms.

Another resident said the children are being robbed of their innocence and he longs for the days when they are able to play without looking over their shoulders.

"Things are out of control. The road is a ghost town and the children can't even go in the yard to play. We have to keep them behind the grille like they are prisoners. The children can't live like that. Right now it not even safe fi we sit in we yard," the resident said.

A business owner said the ongoing feud is putting a damper on his establishment.

"A nuh my business alone enuh. Everybody a feel it because people rather stay hungry than venture on the street. When it touch certain time taxi dem nuh wah come round here because dem fraid," he said.